Ohio Campus Compact is a statewide non-profit coalition of 47 college and university presidents and their campuses working to promote and develop the civic purposes of higher education. Visit ohiocampuscompact.org for more information.

The Charles J. Ping Student Service Award was designed to recognize and honor undergraduate students for their outstanding leadership and contributions to community service or service-learning on their campus and within their community. These students represent the next generation of civic leaders and problem solvers. The award is named in honor of Charles J. Ping, who served as President of Ohio University from 1975 – 1994. An early supporter and Board Member of Ohio Campus Compact, Ping has been a tireless advocate for campus-community partnerships and increased opportunities for students to become active and engaged citizens. This recognition is granted annually to undergraduates at Ohio Campus Compact member institutions. Recipients receive a $250 Legacy Award mini grant, to be given to a nonprofit organization of the winner’s choice. Read more here. 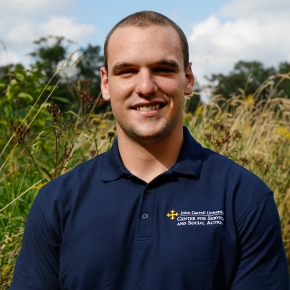 In his time at John Carroll University, Nick Hupka has shown an incredible commitment to service and social justice. Nick's wide ranging involvement with justice issues on and off campus is reflective of his dedication to advocating for marginalized populations and encouraging his peers to venture our of their comfort zones and do the same. Nick has been involved with Labre Project since his freshman year and served as a Student Liaison three and a half years, joining during spring of this freshman year. Nick's leadership has been evident through his involvement with Campus Ministry, serving on the board of the Economics Association and the Boler College of Business Leadership Society, and as the Cadet Command Sergeant Major with ROTC. Nick's work this year on the Student Liaison Leadership Team has proven him a model and mentor in what it means to be a part of the Jesuit mission to be a man for others.