The JCU Department of Political Science presents: THE 2016 WOELFL SEMINAR IN PUBLIC POLICY 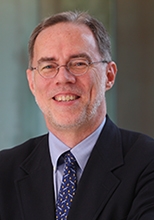 An expert on the Middle East, energy and the economic dimensions of international security, and Chinese foreign policy, Flynt Leverett is part of the founding faculty at the Penn State School of International Affairs, as well as one of its current professors of International Affairs and Asian Studies. From 1992 to 2003, Prof. Leverett had a distinguished career in the U.S. Government. He served nine years as senior Middle East analyst at the C.I.A. On the State Department's Policy Planning Staff, he earned a Superior Honor Award for his contributions to forming an international coalition against al-Qa'ida after the 9/11 attacks and to diplomatic efforts with Libya that led to the normalization of U.S.-Libyan relations after years of estrangement. In 2002, he went to the White House to serve as the National Security Council's senior director for Middle East affairs; he left government service in 2003 because of disagreements over Middle East policy and the conduct of the war on terror. Prof. Leverett is also a life member of the Council on Foreign Relations. He has written extensively on the international relations, politics, and political economy of the Middle East and on U.S. Middle East policy. His latest book, Going to Tehran: Why America Must Accept the Islamic Republic of Iran (2013), is now available in paperback. For information contact John Ambrose, Department of Political Science jambrose@jcu.edu, 216.397.4311 THIS EVENT IS FREE AND OPEN TO THE PUBLIC