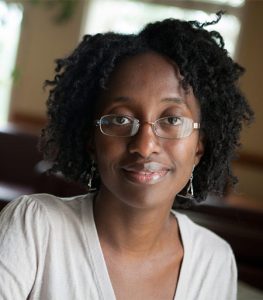 Dr. Jamila Michener Join the Department of Political Science; the Peace, Justice, and Human Rights Program; and the Center for Student Diversity and Inclusion on Thursday, April 19 at 5:00 PM in the Donahue Auditorium for "Taking a Knee, Marching for Our Lives: Political Engagement in an Era of Inequality" by Dr. Jamila Michener. Jamila Michener, Ph.D., is a professor in the department of Government at Cornell University. She studies American politics and policy, with a particular focus on the political causes and consequences of poverty and racial inequality. She is author of Fragmented Democracy: Medicaid, Federalism and Unequal Politics (Cambridge University Press). Michener’s research has been supported by the Russell Sage Foundation, the National Science Foundation, the Robert Wood Johnson Foundation and the Ford Foundation. Her public writing has been featured in the New York Times, the Washington Post, and the American Prospect. Her commentary has appeared on Wisconsin Public Radio, New York Public Radio, and Vox. As an engaged scholar, Michener is co-leader of the Finger Lakes chapter of the Scholars Strategy Network, an organization focused on bringing academic research to policymakers, civil associations, and the media. Michener also sits on the advisory board of the Cornell Prison Education Program and teaches in local correctional facilities. Prior to working at Cornell, she was a Robert Wood Johnson Health Policy Scholar at the University of Michigan. She received her Ph.D. from the University of Chicago and her undergraduate degree from Princeton University. Arrive early at 4:30 PM for a reception in the Dolan Science Center Atrium! Snacks and drinks will be provided. The Woelfl Seminar in Public Policy was established in 1981 in honor of Rev. Paul A. Woelfl, S.J., a founder and long-time chairman of the Political Science Department at John Carroll University. The purpose of the Woelfl Seminar in Public Policy is to provide a forum for the integration of research and public policy issues significant to the Cleveland metropolitan area.