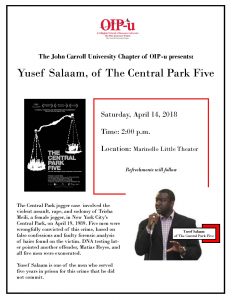 Yusef Salaam of the Central Park Five will be visiting our campus on Saturday, April 14 at 2 pm in the Marinello Little Theater. The Central Park jogger case involved the violent assault, rape, and sodomy of Trisha Meili, a female jogger, in New York City's Central Park on April 19, 1989. Five men were wrongfully convicted of this crime, based on false confessions and faulty forensic analysis of hairs found on the victim. DNA testing later pointed another offender, Matias Reyes, and all five men were exonerated. Yusef Salaam is one of the men who served five years in prison for this crime that he did not commit.

This event is sponsored by the JCU Chapter of the Ohio Innocence Project (OIP-u).