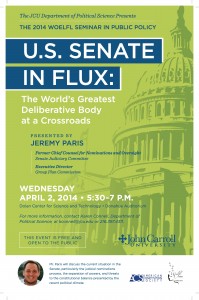 Mr. Paris will discuss the current situation in the Senate, particularly the judicial nominations process, the separation of powers, and threats to the constitutional balance presented by the recent political climate.

If you did not have a chance to make it to the event, the talk is now available at http://youtu.be/Xi9Dw-xCZDg.

Mr. Paris is the first Executive Director of the Group Plan Commission (GPC), the coordinating body between the City of Cleveland, Cuyahoga County, and philanthropic and private sector partners working to reinvigorate Cleveland’s signature downtown public spaces and integrate Lake Erie into the life of the city.  Prior to moving to the GPC, Paris advised Cuyahoga County Executive Edward FitzGerald on these projects as a Special Assistant.  Before returning to Cleveland in 2012, Paris served as Chief Counsel for Nominations and Oversight for Chairman Patrick Leahy on the Senate Judiciary Committee.  In that capacity, he managed the unit responsible for consideration of nominations to the United States Supreme Court, lower federal courts, and the Department of Justice.   In addition, advised Chairman Leahy on legislation related to voting rights, civil rights, and issues related to the U.S. Constitution and separation of powers. An article about Jeremy Paris was recently published in the online magazine Fresh Water Cleveland: http://www.freshwatercleveland.com/devnews/group