John Carroll University student Diana Naoum ’14 has been awarded a prestigious Fulbright teaching assistantship in Turkey for the 2014–2015 academic year. 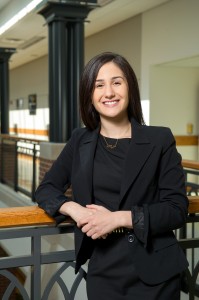 Naoum is a political science major from Solon, Ohio. During her assistantship, she will teach English to students in a new university being established by the Turkish Higher Education Council. In 2011, Naoum attended the Summer Institute for Intensive Arabic and Culture at the Lebanese American University. Last spring, she studied at Regent’s University London for a semester through a JCU-sponsored study abroad program. While there, she founded and served as president of the Human Rights Society. Along with her international experiences, Naoum has completed two internships in Northeast Ohio. She received a summer teaching fellowship at Boys Hope Girls Hope in Cleveland, and interned with Us Together Refugee Resettlement Agency in Cleveland Heights. Through her minor in peace, justice and human rights, Naoum has studied the Syrian refugee crisis and its consequences on women and children in the Zaatari refugee camp. She presented her research at the University’s annual Celebration of Scholarship earlier this month. Naoum has received two academic honors from the JCU Department of Political Science: the Kathleen L. Barber Award for Scholastic Achievement and the John V. Czerapowicz International Relations Award. She also has been named to the dean’s list every semester; has served as president of the University’s Model Arab League and Middle Eastern Student Association chapters; and is a member of Pi Sigma Alpha, the national political science honor society. 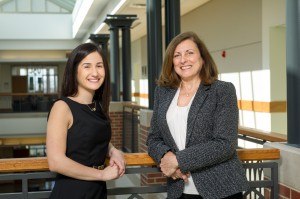 Diana with Mona DeBaz, political science professor and faculty advisor for the Model Arab League. The Fulbright Program, established in 1946, is sponsored by the U.S. State Department. The Fulbright Program is the flagship international educational exchange program sponsored by the U.S. government and is designed to “increase mutual understanding between the people of the United States and the people of other countries.”