The Newman Civic Fellows Award honors inspiring college student leaders who have demonstrated an investment in finding solutions for challenges facing communities throughout the country, recommended by college and university presidents to acknowledge motivation and ability in public leadership. Through service, research, and advocacy, Newman Civic Fellows are making the most of their college experiences to better understand themselves, the root causes of social issues, and effective mechanisms for creating lasting change. These students represent the next generation of public problem solvers and civic leaders. They serve as national examples of the role that higher education can—and does—play in building a better world. Newman Civic Fellows form a unique network of leaders who will inspire and keep hope alive for one another during college and afterward, as the network expands exponentially each year.

The Newman Civic Fellows Awards are made possible through the generous support of the KPMG Foundation and Newman’s Own Foundation, in memory of Frank Newman, who dedicated his life to creating systemic change through education reform. Read more here. 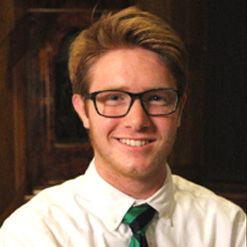 “Sean Freeman, a Communication major at John Carroll University has demonstrated an outstanding commitment to community service, advocacy, and civic leadership in the Cleveland community and beyond as a student leader in the Center for Service and Social Action, as a campus convener, and as a community organizer. Sean is involved in the Carroll Ballers Program at the Cuyahoga County Juvenile Detention Center, tutoring inmates, and leading a civic education program, “We the People” in eighth grade classrooms. Sean has demonstrated a longstanding interest in advocacy related to care for the environment, immigration, and farmworker justice. Sean has led a sustained campus-wide initiative in partnership with the Coalition of Immokalee Workers (CIW). He has organized educational forums on campus, advocacy campaigns in the region, and collective justice actions at the Statehouse in Columbus, Ohio. He has educated and involved over 500 students in CIW’s Fair Food campaign. Sean has also been involved in educating the campus on the complexity of issues surrounding immigration as the result of an immersion trip to the U.S./Mexico border. Sean’s ability to engage others effectively in advocacy and social action, and his sense of social justice make him a powerful advocate for change.” – Jeanne Colleran, Interim President