About the Wolfpack Battalion

Scheduling a National Scholarship Interview with the PMS? 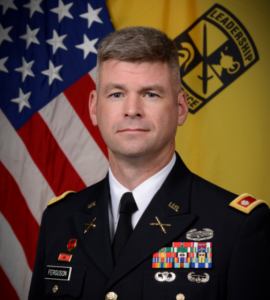 LTC Brian A. Ferguson was commissioned as a Second Lieutenant in the Field Artillery from Mount Saint Mary’s University, Emmitsburg, Maryland in 1999.

His first assignment was to Fort Campbell, Kentucky, and the 101st Airborne Division where he was assigned to 3rd Battalion, 320th Field Artillery (FA) Regiment. While in the 101st, Lieutenant Ferguson served as a Company Fire Support Officer, Headquarters Battery Executive Officer, Support Platoon Leader, Battery Fire Direction Officer, and Battalion Fire Direction Officer. While at the battalion level CPT Ferguson deployed to Iraq in support of Operation Iraqi Freedom (OIF) in 2003. Following the deployment, he attended the Armor Captains Career Course at Fort Knox, Kentucky, and was later assigned to Fort Sill, Oklahoma. At Fort Sill, he was assigned to the 434th Field Artillery Training Brigade, serving as the Battalion Operations Officer for 1st Battalion, 22nd FA Regiment. He commanded Echo battery for 18 months in the same battalion. He competed for a second command and moved within Fort Sill to the 75th Field Artillery Brigade and commanded the 571st Forward Support Company, 1st Battalion, 17th FA Regiment, where he commanded again for 18 months.

Following his second command, CPT Ferguson was reassigned to the 10th Mountain Division at Fort Drum, New York, in 2008 and served as a Division Effects Officer and later the G3 Fires Officer. During this assignment MAJ Ferguson deployed again to Iraq and was responsible for fire support assets from Baghdad to Basra. While in Iraq, he was selected to participate in the Army-Marine Corps Fire Support Officer Exchange Program. Upon redeployment, he was reassigned to 2nd Marine Division at Camp Lejeune, North Carolina. In 2011, while serving with the Marines, MAJ Ferguson deployed to Afghanistan as the Ground Combat Element Fire Support Coordinator for Task Force Leatherneck. Upon redeployment he attended the Command and General Staff College at Ft. Leavenworth, Kansas, graduating in the top 20% of students. MAJ Ferguson was then assigned to Schofield Barracks, Hawaii, and the 25th Infantry Division. He served as the 2nd Stryker Brigade Fire Support Officer, 2nd Battalion, 11th FA Regiment Executive Officer, and as the Deputy Commanding Officer for the Division Artillery. After three years in the Aloha State, LTC Ferguson was reassigned to Fort Leavenworth, Kansas, where he was selected to be a Tactics Instructor and Assistant Staff Group Advisor at the Command General Staff College. After one year he was recognized by the Combined Arms Center and reassigned to Operations Group Charlie, Mission Command Training Program, to serve as the Fires Warfighting Function Chief. The Operations Group is unique and is Congressionally-mandated to train and coach Army National Guard Brigade Commanders and their respective staffs.

In 2017, LTC Ferguson was selected as the Professor of Military Science at John Carroll University in University Heights, Ohio, responsible for the ROTC programs at several universities and colleges in the greater Cleveland, Ohio, area.

LTC Ferguson enjoys spending time with his family, sailing, hiking, volunteering with his kids’ activities, and enjoys reading about history. He is married to Vanessa and has five children, Nathan, Veronica, Henry, Juliet, and Elena. 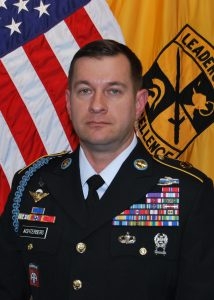 He has deployed to Haiti, Kosovo, Afghanistan, Kuwait, Iraq, and Syria. Notable missions in Afghanistan include support of Operation Enduring Freedom and the 2005 Afghan Presidential Elections. Significant operations in Iraq include the initial invasion in 2003, a Special Operations mission in 2006, the 2007 Surge, and most recently in the fight against ISIS.

In 2016, he was selected to lead the Headquarters Company for the Combined Joint Task Force – Operation Inherent Resolve; leading, guiding, and mentoring more than 1,200 Service and Coalition Members in Kuwait, Iraq, and Syria.

MSG Achterberg has a record of top leadership performance in both personnel and operations management. He has been deployed as a key leader conducting combat operations in multiple areas of responsibility with experience in linear, asymmetric, and unconventional operations.

“I am always seeking ways to improve the efficiency, productivity and quality of an operation – whatever it may be.”

MSG Achterberg places a premium on maximizing time, resources, and human potential. In his new role as SMI he hopes to use his extensive leadership background to inspire Cadets to exceed their own expectations in negotiating obstacles, accepting challenges and in setting/achieving goals on both an individual and collective basis.

His skills and coursework include:

Among his many awards are a Bronze Star, Purple Heart, and an Army Commendation Medal for Valor. Also notably, MSG Achterberg was inducted into the Order of Saint Maurice at the Centurion level for his contributions to the Infantry. He is a seasoned Jumpmaster that has earned his Senior Parachutist Wings as well as the Ukrainian, German, Egyptian, Pakistani, Kuwaiti, and El Salvadorian Parachutist Badges.

MSG Achterberg has been married to his wife Melissa since December 2008 and has two children. 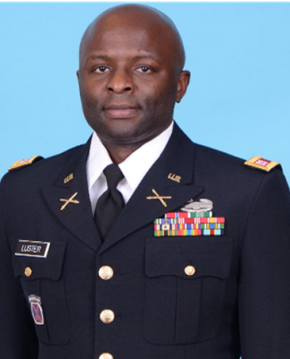 MAJ Billy Luster is a native of Atlanta, Georgia.  He served as an enlisted Communication Specialist before being selected for attendance at the Officer Candidate Service at Fort Benning, Georgia. He is a Graduate of Albany State University with a degree in Computer Science and was commissioned as a 2LT in the Field Artillery on 02 August 2007. 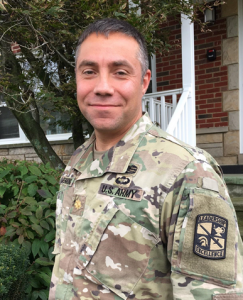 MAJ Timothy Jenkins was commissioned as a 2LT in 2003 to the Chemical Corps. In 2006, he transferred to Military Intelligence Corps.

He has a Bachelor’s of Science degree from Marshall University and his professional education includes: Primary Leadership Development Course, the Chemical Officer Basic Course, the Military Intelligence Officer Advance Course, the Command and General Staff College, the Anti-Terrorism/Force Protection Course, and Airborne School.

MAJ Jenkins deployed to Kuwait and Turkey where he served as Intelligence Planner for the Allied Land Command of NATO. His awards include the Global War on Terrorism Service Medal and the Humanitarian Service Medal.

MAJ Jenkins is married to Rania and they live in Avon with their four children.

MAJ Matt McGraw is an Army Reserve Officer and both former and current Wolfpack Cadre member! He commissioned via the ROTC program at the University of Toledo and was assessed into the Army Aviation branch. While on Active Duty, he served in Korea and Iraq. He is a rated a Senior Aviator in the OH – 58D Kiowa Warrior Helicopter, and has logged in excess of 1,000 combat flight hours while serving multiple tours in support of Operation Iraqi Freedom. His awards and decorations include the Army Air Medal. In addition, he served as an ROTC instructor right here at JCU several years ago.

He said, “I found tremendous pride and fulfillment in working with our Cadets who all worked hard to progress their skills in order to raise their right hand and serve something bigger than themselves…”

In his civilian career, MAJ McGraw is the Senior Director of Sales Operations and Effectiveness for Moen Inc. He holds an MBA from JCU’s Boler College of Business. He resides in Avon, Ohio, with his wife Katherine and their three sons. In his free time he enjoys all things involved with raising three strapping boys! 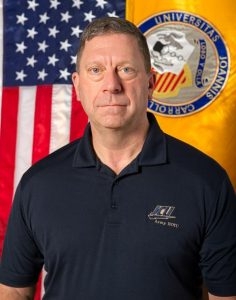 Born in Stroudsburg, Pennsylvania, he graduated from Penn State in 1978 and commissioned as an Ordnance Officer. He received his M.B.A. from Cleveland State in 2002. He is a graduate of the Ordnance Officer Basic & Advanced Courses, Airborne Course, CAS3, and the Command and General Staff College.

He has been assigned to several posts in the U.S., to include Alaska and Hawaii, as well as Germany, Saudi Arabia, and Korea. He retired from the Army after 28 years of service.

His awards include the DMSM, MSM (3 OLC), JMUA, ARCOM, JSAM, AAM, and other service medals.