Presidential Primaries and Predictions: What Happens Next and Can We Trust Experts to Use Information Responsibly?

The Iowa caucuses and New Hampshire primary are the first meaningful results of the presidential election cycle. What do these results mean for the Democratic Party’s nomination, and which factors typically predict presidential nominations? Furthermore, how do experts on presidential elections move beyond personal agendas to relay and analyze information objectively and responsibly? 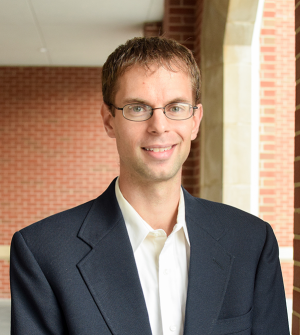 After completing his doctorate degree, Dr. Swearingen worked in Oklahoma City in the House of Representatives from 2010 to 2012 as a Research Analyst and a Geographic Information System, or GIS, Coordinator for Redistricting. In this position, he built a large database that helped him draw 101 State House districts; five congressional districts; and numerous county commissioner districts, school board districts, and career technology districts. He also worked closely with the Redistricting Committee Chairman and Subcommittee Chairmen to draw regional House District plans. Also in Oklahoma City, Dr. Swearingen staffed several legislative committees and fielded research questions on topics relating to redistricting, wildlife, veterans affairs, international relations, and tourism.

Using the experience he acquired in Oklahoma’s state capitol, Dr. Swearingen takes his expertise to the classroom when teaching courses such as Political Analysis, Political Science Research Methods, American Presidency, and Healthcare Access in Latin America, among others. Within the classroom, his other areas of expertise include American politics, elections, voting behavior, Congress, public administration, public management, budgeting, and geographic information systems. Outside of the classroom, Dr. Swearingen helps run the Honduras Immersion Program. While in Honduras with this program, he crash landed a drone.