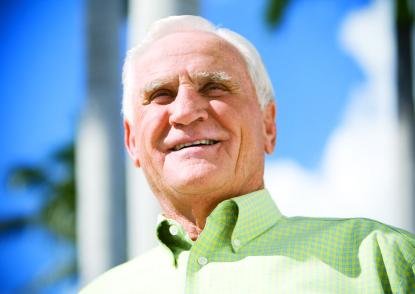 John Carroll University alumnus and NFL legend Don Shula '51 has passed away at the age of 90.

Shula, originally of Painesville, Ohio, is the NFL’s all-time leader in wins by a head coach (347). He is the only John Carroll graduate enshrined in the Pro Football Hall of Fame.

Shula is survived by his wife, Mary Anne Stephens, and his five children: Dave, Donna, Sharon, Anne, and Mike.

Shula’s time at John Carroll was highlighted by his accomplishments as a tailback. Paired with another JCU Hall-of-Fame runner, Carl Taseff, the back set a Blue Streaks mark with a 6.6 yard-per-carry average and was named an All-Big-Four honoree during his time on campus.

Shula was drafted by the Cleveland Browns upon graduation and spent seven years in the NFL as a player before making the transition to coaching. As a coach, Shula’s accomplishments were legendary. 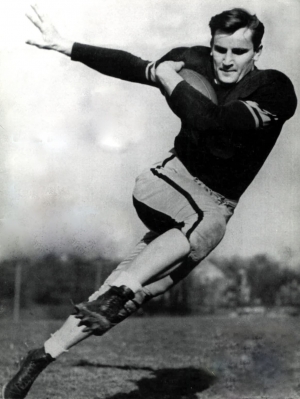 Holding a career .665 winning percentage and holding a record of 347-173-6, the former Blue Streak led two different teams to Super Bowl and NFL championship appearances, in addition to making the postseason 19 times in a coaching career that spanned 33 years (1963-1995).

Sports Illustrated honored Shula in 1993 by naming him their Sportsperson of the Year. Shula became the first professional coach to receive the honor.

Shula’s coaching accomplishments are at an all-time level, but his character is what he’ll be remembered for. Quoted in his book Everyone’s a Coach: Five Business Secrets for High-Performance Coaching, Shula says: “I don’t know any other way to lead but by example.”

For generations since Shula’s time on John Carroll’s campus, students and athletes alike have taken these words and turned them into a mentality. His impact on the NFL and the Northeast Ohio region is one that will be far beyond his time.

His legacy lives on at John Carroll University through Don Shula Stadium, the Shula Chair in Philosophy, and the incredible legacy of fellow Blue Streaks in the NFL’s coaching and front office ranks.

Today, we mourn the loss of one of the finest coaches in the history of football, Don Shula, a member of the Class of 1951.

He will be remembered by most for his Hall of Fame NFL coaching career. But his impact on our community cannot be overlooked. He set a high standard for future JCU alumni looking to play, coach, or work in the NFL. Today, Don Shula Stadium and the Shula Chair in Philosophy stand as clear reminders of the man who never forgot his roots.

Our condolences go out to his family, along with the thanks of a community grateful for his generosity and example. 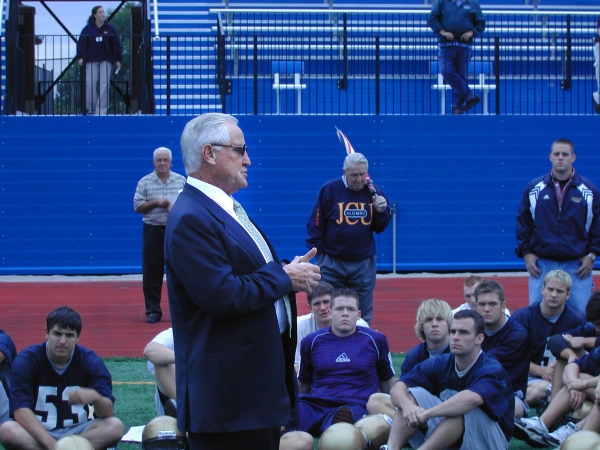 I’m saddened to hear about the passing of Coach Shula. He was a tremendous man on and off the field. He carried himself with grace and class. He’s the epitome of what it means to be 'Men of Carroll.' 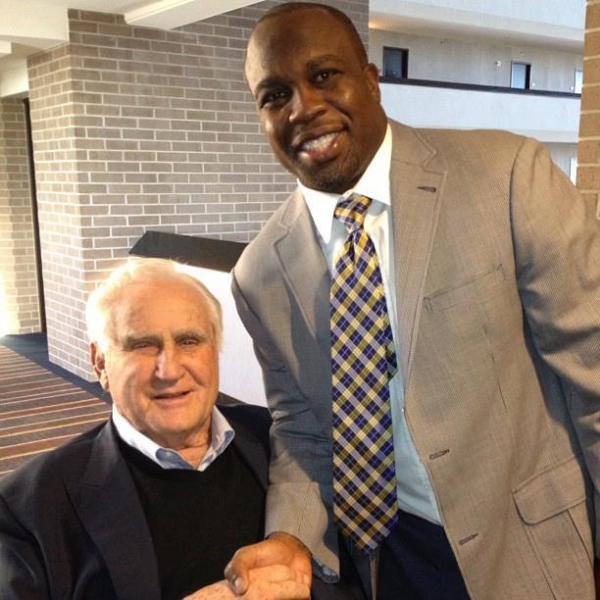 Don Shula was a legendary coach, a great man and an inspiration to us all. I had the pleasure and privilege of assisting him along with other teammates in 1994 when the basketball gym was dedicated in his name.

Don Shula’s impact on John Carroll University and our athletics programs cannot be overstated. He took leadership skills from JCU to the NFL, where he set the standard for so many to follow. He will be missed, but certainly not forgotten as his name adorns our campus stadium and his legacy lives on through the character and competitiveness of our student-athletes and alumni. 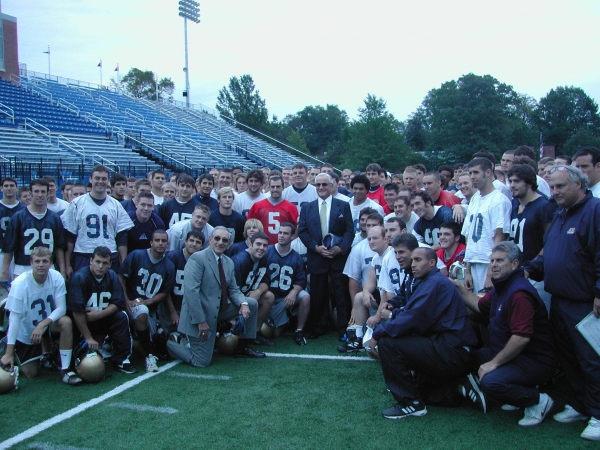 Today is a tough day for anyone that attended John Carroll University, as well as everyone that had the pleasure of knowing Coach Shula. He was an incredibly inspirational leader and represented the university with class and excellence. He will forever be remembered for his many accomplishments, but most importantly, his commitment to helping the people around him will never be forgotten. My thoughts are with the Shula family, especially his wife, Mary Anne, during this very sad time. Rest in peace to the greatest coach to ever do it.

The Philosophy Department at JCU will forever be grateful to the generosity and vision of Don Shula. His experience studying philosophy led him to found the Don Shula Chair in Philosophy, which has greatly enriched the educational experience of JCU students and provided valuable resources for faculty research and scholarship. He will be sorely missed, but his legacy will live on.

It has been said that Don Shula was one of the finest gentlemen in the game of football. I cannot think of a better representation of John Carroll University in the sports world. He was a winner, a champion, and he led with integrity on the field and in his life. He was also a champion of all things JCU, even serving as an honorary chair this year in celebration of our 100th anniversary of varsity athletics. Our stadium bears his name, but he was generous in his support of causes across our academy. I believe the outcomes of a university’s graduates serve as its greatest points of pride. For decades, John Carroll University has been proud to call Don Shula an alumnus, and his legacy will forever be with us, continuing to impact future generations of students. On behalf of the JCU Alumni Association, I extend my deepest condolences to the Shula family.

Coach Shula is the standard in the National Football League for winning, leadership, character and teamwork. His consistency year in and year out and his commitment to the personal relationships he formed with his coaches and players was evident to this day. I am proud to say I come from Ohio and John Carroll University as Coach Shula did. We will continue to try and honor his legacy of class and integrity moving forward while chasing his standard of excellence. Deepest Condolences to his family and friends and the entire Dolphins organization.
-Josh McDaniels '99, Offensive Coordinator, New England Patriots

Coach Shula laid the foundation for many of us to follow and his legacy extends far beyond the Game of Football. His incredible spirit along with the standard of excellence he established will long be admired and impossible to duplicate. Condolences to the Shula Family over the loss of an iconic figure and most importantly a great human being.
-Nick Caserio '98, Director of Player Personnel, New England Patriots

Very sorry to learn of the passing of Hall of Fame coach and fellow @JCUFootball alum Don Shula. Coach spoke to my father about John Carroll University and encouraged my brother, Chris, to take a look. We both ended up there and loved it. Thank you and RIP Coach Shula.
-Brian Polian ‘97, Special Teams Coordinator, University of Notre Dame Football (via Twitter) 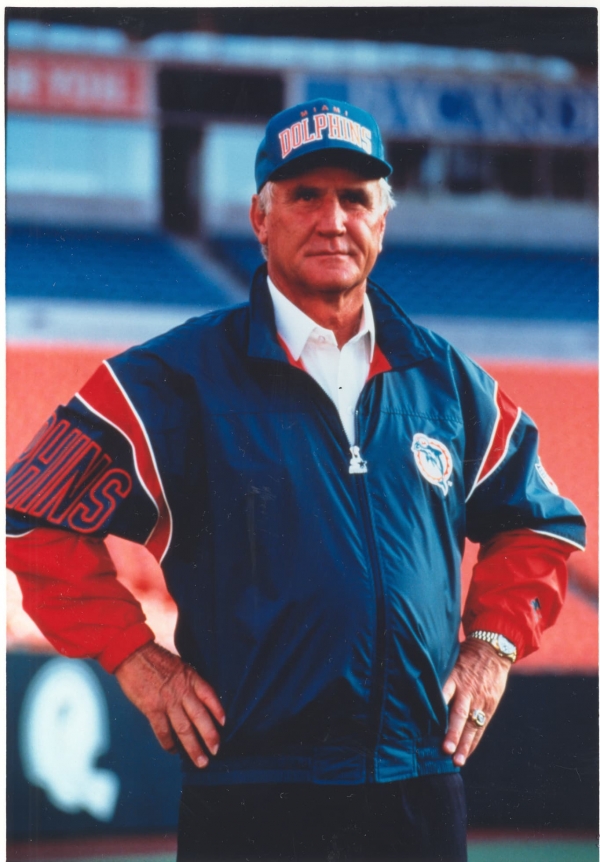 John Carroll and the coaching profession lost an ICON on Monday with the passing of Don Shula. While most people will measure his success by Championships and Super Bowls, I believe Coach Shula’s legacy is about his commitment to excellence in every phase of his life. He used football as his vehicle to help lead people to places they never thought they could go. He was truly Magis-Driven (a man for others) in all he did. John Carroll is proud to call him our son.

May we ask that someone is at the gates of Heaven to meet Coach and hand him his whistle so that he may continue to guide and comfort those he has left behind. And may we take his example and Jesuit approach to heart as we continue our own journey to help those around us live better lives for others.