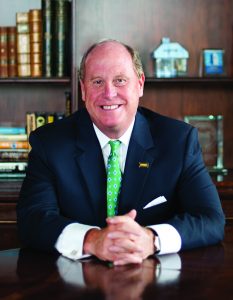 Howard W. “Hoddy” Hanna, III, Chairman of Howard Hanna Real Estate Services, will deliver the commencement address at John Carroll University on Sunday, May 20, 2018. Hanna, a 1969 John Carroll alumnus, leads the third largest real estate company in the United States. Headquartered in Pittsburgh, Pennsylvania, Howard Hanna Real Estate Services is the largest privately owned real estate company in the nation, with three generations of the Hanna family involved in day-to-day operations. The company specializes in residential, commercial, mortgage, title and insurance brokerage services, and delivers quality services through 262 offices across Pennsylvania, Ohio, New York, Virginia, Michigan, West Virginia, North Carolina, and Maryland with more than 9,200 agents and employees. Obtaining his real estate license at 18 years old, Mr. Hanna began his real estate career as a weekend sales associate for Howard Hanna while attending John Carroll. His reputation as an industry innovator is well known, and he is consistently recognized, nationally, as being one of the most influential people in real estate. He has earned numerous awards, including the National American Heritage Award from the Anti-Defamation League (ADL), and the coveted Good Neighbor Award from the National Association of Realtors for his accomplishments in community service, especially children’s healthcare. Mr. Hanna is a member of the John Carroll Board of Directors. He also served a term on the board of the Federal Reserve Bank of Cleveland. Active in the community, he is the chair of the Children’s Hospital of Pittsburgh Board of Trustees and serves as a member of the hospital’s Foundation board. Hanna is founder and former chairman of Family House, a home away from home for patients and families with life-threatening illnesses in Pittsburgh; and he personally chairs the annual companywide Howard Hanna Children’s Free Care Fundraising campaign. Howard Hanna offices have raised and donated more than $15 million to children’s hospitals and related programs in markets the company serves. Contact: Tonya Strong-Charles |  Executive Director of Media Relations | 216.397.1958 or tstrong@jcu.edu