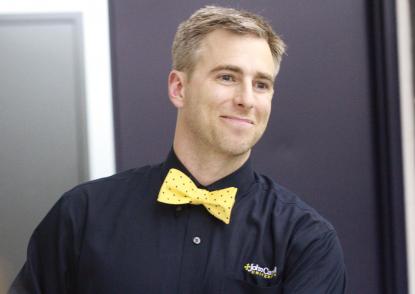 The Jesuit mission matters to Mark Fino. It mattered long before he rebuilt John Carroll swimming & diving. It mattered before the six OAC titles, the 175 All-OAC performers, the 85 conference event titles, the 71 program records, and the four NCAA Championship invitations.

In many ways, the mission is the thing that matters most to Fino. “I’ve always coached with the idea of men and women for and with others,” says Fino, a graduate of University of Detroit Jesuit High School. “It changed me when I was in high school, and I love how it applies to team sports and group dynamics.”When the JCU job came open in 2013, it was easy to apply. “I had just returned from my honeymoon, and I immediately jumped in,” he remembers. “The Jesuit mission has always been a part of my coaching philosophy. I left behind a great team at Oberlin, but this was the right opportunity at the right time.”

Fino inherited a program that was in need of a fresh start. The men’s and women’s teams had not topped the OAC since 2004 and 2008, respectively.

In my interview, they were upfront: John Carroll expects to win. When we gathered the team for that first meeting, I made it clear. We are going to win OAC championships.

Fino was confident, but unsure of when that would happen. “We had some quality swimmers on both sides,” he says. “But we weren’t where we needed to be.” He received confirmation of that fact when they traveled to Ohio Northern and lost by a combined 134 points in his first meet as coach. “I walked up to Lindsay Fano on the deck, and you could tell it was just eating at her,” remembers Fino. “That’s when I knew this team had a hunger.”

The first three years of Fino’s tenure were highlighted by consistent growth. The women’s side finished in the top-three each year, including a narrow 26-point runner-up finish to Mount Union in 2016. Fino and his staff were named OAC Women’s Coaching Staff of the Year as a result. The men notched two top-three finishes in the same time span.

As his team developed, Fino continued to recruit swimmers that specifically fit the JCU brand.

Swimming is such a unique sport, so not many people have experienced a culture that truly embraces that team mentality. I tell our kids: that’s what we do on deck. Kids have never been taught that way. They’re told it’s about you and your lane. Here, I care about how the team performs, and about your influence on the people around you. When you remove the time from the equation, it frees them up to just swim, and it all flows from there.

It truly began to flow for the Blue Streaks in year four. The 2016-17 squads headed into the championship confident that they could succeed. Fino believed that the women would win, but something surprising happened. The men shocked the conference, and secured the first sweep of men’s and women’s titles for JCU since 2004.

“It was such a testament to the men that they went out and performed at their highest level of the season,” Fino says. “They were winning events they weren’t expected to win, and won by a huge margin. Our women felt like they should win it, and so by taking care of business it was a special sweep for us.”The next year, the difficulties of repeating were apparent. It was the second consecutive sweep, but the men nearly lost the title.

“The natural tendency is to sit back in your chair and take your foot off of the gas. We won by such a margin, and thought that was the norm. We started to back off a bit and almost didn’t win the next year. It was a good lesson that re-ignited us.

2018-19 was the next step forward. “We moved some longtime duals off the schedule, and started to add some D2 opponents and better D3 teams,” Fino says. “We wanted to show our swimmers that this is the level we need to compete with in order to get better.” The Blue Streaks earned a “three-peat” on both sides, and were represented by six student-athletes at the NCAA Championships.

What does the future look like for JCU swimming? It starts with continuing to build the culture, and challenging as a team at the national level.  “We’re looking for work ethic and a desire to do better,” says Fino. “We can work with that. What I tell all of the kids as they sit in my office is, I expect you to have a 4.0 GPA and be an All-American,” Fino says. “If you can’t do that, we’ll work the bar back to fit the right goal for you, and then we’ll help you reach your full potential.”