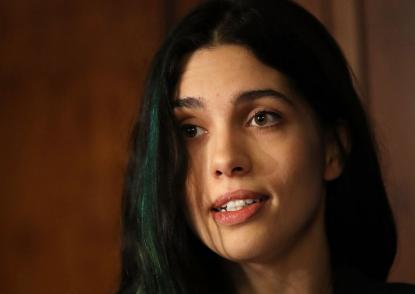 Conceptual artist and political activist Nadya Tolokonnikova will participate in a panel discussion at John Carroll University on Sunday, March 29 at 2 p.m. in Kulas Auditorium.

Several departments at Case Western Reserve University and the Cleveland Institute of Art are also sponsoring the conversation.

Tolokonnikova is a conceptual artist and political activist from Russia and a recipient of the Lennon Ono Grant for Peace. She has spoken before the United States Congress, British Parliament, and European Parliament, and has appeared on stage with world leaders including Bill Clinton. She is a founding member of the art collective Pussy Riot, which focuses attention on feminism, LGBT rights and human rights violations.

In August 2012, Tolokonnikova was sentenced to two years of imprisonment following an anti-Putin performance in Moscow’s Cathedral of Christ the Saviour. This protest attracted international media attention and support from the likes of Peter Gabriel, Sir Paul McCartney, Madonna, and Bjork. Shortly after her release in December 2013, she announced the opening of an independent news service and media outlet, MediaZona, which reports on Russia’s courts, law enforcement and prison system.

“It is my firm belief that one of the things that will make Nadya’s visit so meaningful is that she has served time in a Russian prison and continues to be an advocate for human rights, women’s rights, criminal justice reform, and the role of art and music,” said Peden. “We will use her visit as a powerful learning opportunity for students, staff, faculty and the public.”

The event is free and open to the general public.