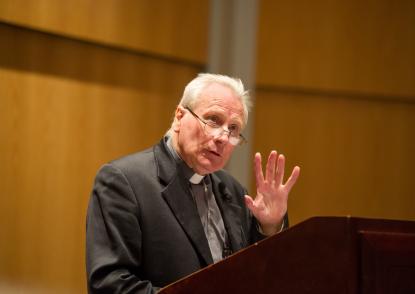 Archbishop Fitzgerald is a scholar of Islam and one of the world’s leading experts on Christian-Muslim relations. Before teaching at John Carroll, he served as president of the Pontifical Council for Interreligious Dialogue, papal nuncio to Egypt, and Vatican delegate to the League of Arab States.

As a member of the Department of Theology & Religious Studies in 2015, Archbishop Fitzgerald taught a course on the Qur’an to John Carroll undergraduate and graduate students. While on campus, he also presented a four-part lecture series on the Islamic tradition of the ninety-nine names of God. In 2018, Archbishop Fitzgerald returned to campus to deliver the Tuohy Lecture, titled “The Situation of Christians In The Arab World: How Interreligious Dialogue Can Help.”

Archbishop Fitzgerald is one of 13 new cardinals named by Pope Francis in a surprise announcement on Sept. 1; he is one of three new cardinals over the age of 80 who are not eligible to vote in the next conclave.

I have the great privilege of calling Cardinal Designate Michael Fitzgerald a true friend and colleague. For many years, he has been perhaps the greatest voice in the Catholic Church speaking for dialogue and understanding between Islam and Christianity. He is not only a great Church leader but a truly wonderful scholar and individual. His work on the 99 Names of God, shows the world how much Islam and Catholicism can learn and benefit from each other. His elevation is much deserved and again shows the commitment to interfaith dialogue of the Catholic Church under Pope Francis.

During his time teaching at John Carroll, Archbishop Fitzgerald modeled for students a deep Catholic commitment that was, at the same time, radically open to other religious traditions. He showed us how much we can learn about ourselves when we engage in respectful dialogue with others.

Designate Michael Fitzgerald is a splendid human being who has rendered great service to the Church, and clearly Pope Francis has come to share that opinion as well.

If you are a news reporter or photographer seeking an expert interview, John Carroll University can connect you with the appropriate resources based on your interest.