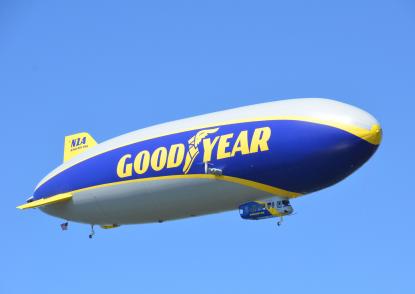 As John Carroll football attempts to rise to the top of the OAC standings this weekend, the Goodyear Blimp will rise high above Don Shula Stadium for the first time on Saturday.

The “Blimpworthy” match-up between the Blue Streaks and Mount Union Purple Raiders will take place at 1:30 p.m. at Don Shula Stadium. At halftime of the game, John Carroll University and the National Football Foundation will recognize London Fletcher ’98 in advance of his induction into the College Football Hall of Fame in December.

It will be a special day for our community as we welcome London home and welcome the Goodyear Blimp to Don Shula Stadium for the first time,” said Michelle Morgan, senior director of athletics. “I can think of no better way to commemorate our 100th year of athletics at JCU, as well as the 150th season of college football.

London Fletcher played four seasons at John Carroll before beginning his 16-season career in the National Football League. He was a two-time first team All-American, the Football Gazette's 1997 Division III Linebacker of the Year, and set single-game (29) and single-season (202) tackling records as a Blue Streak. He is the first John Carroll alumnus to be inducted into the College Football Hall of Fame.

Fletcher now shares a special bond with the Goodyear Blimp, an honorary member of the College Football Hall of Fame. The blimp is the first non-player or coach to be inducted. Since 1955, the iconic airship has covered more than 2,000 games, providing aerial coverage of college football’s biggest moments.

ESPN Cleveland 850 AM will host a live pregame show outside the stadium from 11 a.m. to 1 p.m. featuring Aaron Goldhammer.

Fans can purchase tickets to the John Carroll-Mount Union football game at jcusports.com. The athletics website will also be the host of the live stream video broadcast. The radio broadcast can be heard locally on WJCU 88.7 FM, as well as around the world on wjcu.org.