"For The Greater Glory of Pod" Launches on iTunes 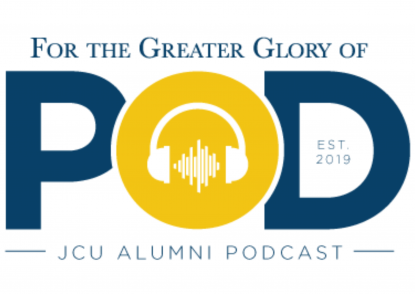 John Carroll University continues to expand its content offerings with the launch of “For the Greater Glory of Pod.”

Hosted by David Vitatoe ’00, executive director of alumni relations, and Chelsea (Gerken) McTigue, ’14, ‘16G, alumni engagement assistant, the official podcast of the JCU Alumni Association dives into history, traditions and folklore at JCU through conversations with alums and members of the university community.

Through their work, Vitatoe and McTigue have developed a deep appreciation for John Carroll’s rich history and the uniques stories of the institution’s alumni.

“I have found that so many of our alumni have unique stories to tell of their John Carroll experience and no two alumni tell a story the same way.” Vitatoe said. “Not every story can go in the magazine or on the website, so we’re focusing more on what we call the ‘lore” of JCU. Chelsea and I know enough about the topics to be dangerous, but we bring on the guests to help us get a better perspective and fill in the gaps.”

Season one of "For the Greater Glory of Pod" includes eight episodes about the John Carroll experience. Some topics include love at JCU, the history of student service, first-generation students, the legend of Harry Gauzman, and JCU basketball in the 80’s.

The first season of the podcast was produced by Spencer German ‘13 and recorded in the WJCU studios on campus in University Heights. The show also includes a studio-recorded jazz version of the fight song (Onward On, John Carroll) and voiceovers by long-time radio professional Tommy Bruno ’95.

Plans for season two are underway as the team hopes to get back in the recording studio this fall with more JCU history to explore and uncover.

“Ideas about the legends and lore at John Carroll are never ending,” said McTigue.

Pizzazz on the Circle is the inaugural sponsor of "For the Greater Glory of Pod." Season one of the podcast is now live on iTunes.