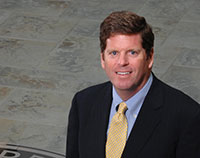 David W. Short, chair of the John Carroll University Board of Directors, will deliver the 2015 commencement address at the University on Sunday, May 17, at 11 a.m. He will receive an honorary doctorate at the ceremony, during which approximately 745 undergraduate and 210 graduate students will receive degrees. “We are truly grateful for Dave’s exceptional leadership and service in support of John Carroll,” said Robert L. Niehoff, S.J., John Carroll University president. “He has shown an unwavering commitment to be involved in the transformation of our campus by building stronger ties to our alumni, as well as creating opportunities for the University’s next generation of graduates,” he added. A 1981 John Carroll graduate, Mr. Short earned a Bachelor of Arts in Communications. He has served on the JCU Board of Directors since 1999, and as chair of the board for the last six years. During his tenure as chair, Mr. Short oversaw the creation of the Tim Russert Department of Communication and Theatre Arts in honor of Mr. Russert, a 1972 graduate; numerous campus improvements; and the successful launch of the $100 million Forever Carroll Campaign, which has raised $86 million to date. He and his wife, Beth, are generous supporters of the University and made one of the leadership gifts to the Forever Carroll Campaign. They reside in Pittsburgh, Pennsylvania, and have four children: David Jr., is a 2014 graduate of John Carroll. Mr. Short returns to campus often, including every fall to play in the Andrew “Dewey” McCarthy Memorial soccer game, in honor of his classmate who passed away in 1983 after an automobile accident.  He also remains very active with his former JCU fraternity, Iota Chi Upsilon (IXY), helping to raise funds for the IXY Scholarship. The scholarship was established to benefit undergraduate students who are the legacy of an IXY member. Mr. Short retired in 2008 as chairman and co-chief executive officer of the American Funds Group, an organization that manages in excess of $900 billion for individual and institutional investors. Contact: Tonya Strong-Charles |  Executive Director of Media Relations | 216.397.1958 or tstrong@jcu.edu.