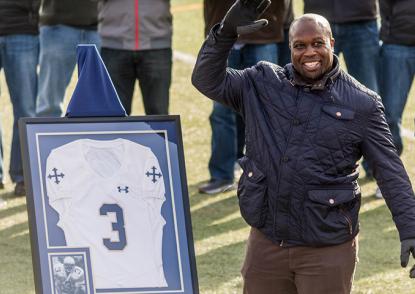 London Fletcher ’98 will be honored when the John Carroll University football team hosts the University of Mount Union on Saturday, September 28, 2019. The game is slated for a 1:30 p.m. kickoff from Don Shula Stadium.

A two-time first team All-American, Fletcher was named the 1997 Division III Linebacker of the Year by the Football Gazette. He captained a 1997 JCU squad that become the first in school history to win a Division III playoff game. Fletcher spent 16 seasons in the NFL with the St. Louis Rams, Buffalo Bills and Washington Redskins, earning a Super Bowl ring with the Rams following the 1999 season.

More details will be announced closer to the season at jcusports.com.