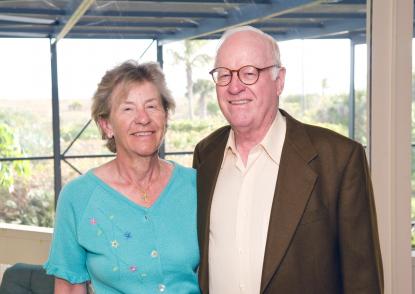 John G. “Jack” Breen ’56 passed away on October 28, 2019 at the age of 85. He was a former chair of the John Carroll University Board of Directors, a director emeritus, and lifelong benefactor and supporter of his alma mater.

Breen was a family man who inspired others through his generosity, and ethical and thoughtful leadership.

“Jack Breen was an honest, self-made man who impacted countless people through business acumen, Catholic faith and commitment to philanthropy,” said Michael D. Johnson, Ph.D., president of John Carroll University. “His legacy at John Carroll will live on through his incredible service to the institution as a board member, lifelong ambassador, and generous benefactor through endowments and scholarships.”

Breen was born on July 21, 1934. The son of Irish and Scottish immigrants, his father was a self-taught tool maker who quit school at age 10 to make a living and, at age 18, came alone to America. His mother had a stroke when she was 38 years old and raised Jack and his four siblings with one hand. He came to John Carroll with little money, and earned his B.S.B.A. in 1956. As a student, he was a member of Alpha Kappa Psi fraternity and Alpha Sigma Nu, the Jesuit honor society. Breen earned his M.B.A. from Case Western Reserve University in 1961.

Breen is perhaps known best locally as “the man who saved Sherwin-Williams.” From 1979 to 1999, Breen served as chief executive officer of the company, pulling it from the brink of bankruptcy. He refocused the company around the brand’s stores, and the company saw sustained growth as a result.

Breen’s success in business was only surpassed by his generosity to John Carroll and the region. He served as a board member or trustee for many organizations, including University Hospitals of Cleveland, Notre Dame College, PNC, and Stanley Black and Decker, among others.

The Jack and Mary Jane Breen Endowment for Catholic Studies created the Institute of Catholic Studies and the Breen Family Catholic Lecture Series at John Carroll. In 2011, they endowed the Jack and Mary Jane Breen Chair in Catholic Theology; the teaching position within the Department of Theology and Religious Studies enhances JCU’s Jesuit and Catholic tradition through the teaching of an orderly, rational, and intelligible account of the Catholic faith.

“It is hard to think of one person who did more to support the Catholic mission of John Carroll than Jack Breen,” said Edward P. Hahnenberg, Ph.D., the Jack and Mary Jane Breen Chair in Catholic Theology at John Carroll University. “He had clear convictions and strong opinions, and he made things happen. Our students benefit every day from the generosity Jack and Mary Jane have extended to their alma mater.”

"Jack and Mary Jane Breen's leadership and vision in endowing the Institute of Catholic Studies have greatly enhanced the University's capacity to renew and maintain the Catholic intellectual tradition on the John Carroll campus," said Paul Murphy, Ph.D., director of the Institute of Catholic Studies and Breen Chair in Catholic Studies. "Our students will benefit from their generosity for generations to come. For this I remain deeply grateful. On a personal note, Jack and Mary Jane offered to me and my family their warm and generous friendship, something we consider to be a real grace. They remain in our prayers."

Breen was the named an emeritus member of the JCU Board of Directors in 2009 after 29 years of service, including four as board chair (1991-1995). During his tenure, he chaired nearly every Board Committee.

He was awarded the John Carroll Alumni Medal in 2005 for his “deep affection for his University and his fierce determination to make it great.” Breen was the 2006 recipient of the Edward M. Muldoon Award for Civic Entrepreneurship. In 2009, he was named a director emeritus; he served on the Board in this role until his passing.

"Jack Breen was generous in so many ways to great institutions in northeast Ohio, including John Carroll," said Michael Merriman, former Board chair of John Carroll. "He loved the University, his classmates from 1956, and many of the Jesuit priests who he worked with over the years. John Carroll has truly benefited from him. He was a mentor to many of us and he was very proud of the success of JCU alumni at Sherwin Williams, Parker, Goodyear and MTD. He will be missed."

Locally, the Breen name has also become synonymous with quality healthcare and education. In 1998, Ursuline College dedicated the Breen School of Nursing following a contribution from the family. In 2009, the Breen’s donation to University Hospitals established the Breen Breast Health Center. Breen stepped down from the UH board that year after 29 years of service; he became only the second person to be named a UH Lifetime Director.

He is survived by his wife Mary Jane and his five children.

Jack Breen devoted his life to the advancement of the companies and organizations he served.

Jane and Mary Jane Breen have made a lasting impact on John Carroll University through their commitment to their alma mater. Send your memories of Jack Breen to journal@jcu.edu.