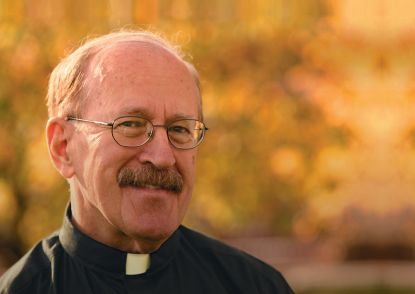 Having Jesus as a companion and consciously being His companion fills me with an unspeakable joy. I can never thank Our Lord for the blessings I’ve received and continue to receive in my life. The people I’ve met at different times of my life have been Our Lord’s greatest blessings to me, for which I shall always be grateful.

Gifts in his memory should be made to The Rev. Casey R. Bukala, S.J. Endowed Tribute Fund at John Carroll University, which supports three endowed scholarships.

Casimir “Casey” Bukala was born in Cleveland on July 14, 1931. The son of immigrants Walter and Mary Bukala, he had four siblings: Stella, Helen, Gene, and Tess. Following his time at Saint Hyacinth Church and School, he graduated from Holy Name High School in 1950 before choosing to attend John Carroll.

He earned a B.A. in philosophy from JCU in 1954, and an M.A. in Religious Studies the following year. He went on to attend Western Reserve University before serving in the United States Army from 1956-58. He entered the Jesuit Novitiate on September 1, 1958, and studied at Colombiere College, West Baden College, and the Bellarmine School of Theology. His formal ordination took place on June 14, 1966, and he was awarded a Ph.D. from Boston College in 1970.

Much of his life was spent in devotion to the Jesuit mission and service to others. Fr. Bukala accepted a teaching position at JCU in 1970. He deeply cared for his students, helping them grow in the classroom and in their faith. He celebrated their weddings, and in many cases, taught their children as well. He was the team chaplain for wrestling from 1974-87, and for football from 1987 until his retirement to Colombiere. For his service and generosity, “Casey’s Concourse” at Don Shula Stadium bears his name.

Fr. Bukala was honored with the Distinguished Faculty Award in 1981, the Centennial Medal in 1986, the Alumni Service Award in 1999, and the Alumni Medal in 2002. He was inducted into the JCU Athletic Hall of Fame in 2005. He celebrated his 50th Jubilee on September 21, 2008 at The Church of the Gesu. Fr. Bukala was also a former member of both the Board of Directors and the Alumni Board.

In maybe his most important lesson, he challenged us to do the sometimes unthinkable and forgive those who have wronged us.

The Fr. Casey Bukala, S.J. Forgiveness Fellowship Initiative will forever stand as a testament to his work. The website is the home for those who need to forgive or be forgiven, offering resources and support. Members of the JCU community are welcome to come together in prayer in the space, share their personal stories, or connect with the Jesuit community.

The Bukala Tribute Fund exists to help John Carroll attract and retain an academically talented and diverse student body. Supported scholarships include The Sr. Juanita Shealey Endowed Scholarship, which was established in April 2005 in honor of Sr. Juanita Shealey, CSJ. It supports an African or African-American student. The Rev. Bukala Endowment for Minority Students was established in August 2004 to financially support and retain minority students experiencing financial hardship. The Bukala Endowed Philosophy Scholarship was established in April 2005 and recognizes a graduating senior for excellence in philosophy.

Fr. Bukala retired from the classroom in May 2015 following 45 years of service. He moved to Colombiere Center in Clarkston, Michigan.

Generations of John Carroll community members owe some part of their experience to Fr. Bukala; truly, his legacy is immeasurable. In the coming days, we will share information on memorial services and celebrations of Fr. Bukala’s life.

Fr. Bukala's philosophy on forgiveness challenged us to let go of the pain and hurt we feel.

Fr. Bukala helped generations of JCU alumni grow in the classroom and in their faith.

"Casey," as he was affectionately known, was a lifelong friend to the entire JCU community.

As we remember Fr. Bukala's life and legacy, we would like to hear from you–his students, colleagues, and friends. Please send your messages, memories, photos, and stories to journal@jcu.edu.