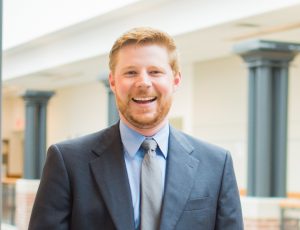 Ryan Brown, 2018 NBC/JCU "Meet the Press" Fellowship recipient John Carroll University graduating senior, Ryan Brown, is the recipient of the 2018 NBC/JCU “Meet the Press” Fellowship. Brown is a Political Science major, with a minor in Business. Brown most recently served as editor-in-chief of The Carroll News, the University's student-run newspaper.  He previously held the position of world news editor for the publication. During the 2016 Republican National Convention in Cleveland, Ohio, Brown was hired as an intern for ABC News. He has also worked as a political consultant in his home state of Michigan, and volunteered for Ohio Governor John Kasich's presidential campaign. Named a Presidential Scholarship winner as an incoming John Carroll freshman, Brown has made the Dean's List multiple times. He has been active in campus life, working as a JCU tour guide for the Office of Admission, and participating in an immersion trip to Nicaragua. The NBC/John Carroll University “Meet the Press” Fellowship was created in 2009 in memory of the Sunday morning program’s legendary host, Tim Russert, a 1972 graduate of John Carroll. It is awarded annually to a John Carroll graduating senior who plans to pursue a career in political journalism. The Fellowship is a nine-month position at NBC’s “Meet the Press.” It affords a John Carroll graduate the opportunity to gain experience in the research and production of the weekly political talk show under the direction of the program’s executive producer. Contact: Tonya Strong-Charles | Executive Director of Media Relations | 216.397.1958 or tstrong@jcu.edu