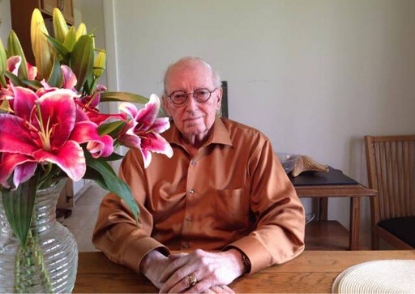 Professor Thomas P. Roche, Jr., 89, passed peacefully after a long illness on May 3, 2020 in Beachwood, Ohio. He is survived by his loving husband, Robert H. "Bo" Smith, and other family members. Affectionately known around JCU as just “Tom,” he received his bachelor's degree from Yale University in 1953. He went on to earn a master's degree and a Ph.D. in English from Princeton University in 1958 and was appointed to be a professor in 1960. Until 2003, he was the Murray Professor of English Literature at Princeton. Tom was a favorite professor to students for decades, enthralling them with his wit and enthusiasm for English literature.

Tom Roche and Bo Smith educate their students in true John Carroll fashion. Being in their class, I knew I was receiving an education that would prepare me to take on the world. The stories of their experiences, both intellectual and personal, somehow always seamlessly aligned with the subject matter of the class to provide for an indescribable and true learning experience for all of their students. They were able to go beyond lecturing and really make connections for their students in ways that not many others are able to do. It is because of them that I am able to confidently say that I have read and understood one of the most difficult works of fiction in the English language – Finnegans Wake. They have truly been the most influential professors I have ever had throughout my time at JCU.

After teaching for forty-three years at his beloved Princeton, Tom and Bo spent three years as Visiting Professors at Arizona State University, three years at the University of Notre Dame, and then became the Gerard Manley Hopkins Professors of English at John Carroll University in University Heights, Ohio until Tom's death. At each university, a "Tom and Bo class" quickly became one of the most popular on campus. The “Dynamic Duo” won JCU’s Outstanding Part-Time Faculty Award in 2019.

Simon Gikandi, the chair of the English department at Princeton University, said “Tom was a droll and erudite citizen of the department for more than 30 years, a font of learning and one of our great undergraduate teachers. He was a fine storyteller, and author of countless small, telling generosities to students and colleagues alike. His quick wit; his donnish, owlish mock-severity; and his shy smile will be missed.”

Tom was a foremost expert in epic poetry, particularly Edmund Spenser's The Faerie Queene. Along with numerous academic journal articles, Tom published several books, including the seminal treatment of the poem entitled The Kindly Flame: A Study of the Third and Fourth Books of Spenser's Faerie Queene in 1964 and the Editorial Apparatus to it in 1984, Petrarch and the English Sonnet Sequences in 1989, and Petrarch in English in 2006. He was also the founder and co-editor for many years of Spenser Studies: A Renaissance Poetry Annual. He was working on a book about the role of the Muses in art history at the time of his death.

In addition to teaching many brilliant students, Tom studied with and under some illustrious writers and academics. He was C. S. Lewis's first American student at Cambridge University in England, where his fellow students and best friends there were the future great American critic and teacher Harold Bloom and Ted Hughes, the future Poet Laureate of England and husband of Sylvia Plath. Tom, Harold and Ted were known as The Three Musketeers.

For whatsoever from one place doth fall, Is with the tide unto an other brought: For there is nothing lost, that may be found, if sought.