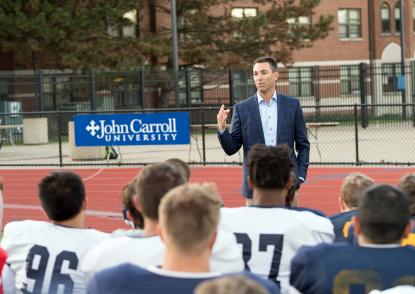 Tom Telesco ‘95 has worked his way through the NFL ranks since graduating from John Carroll; a journey that has culminated in his current role as the General Manager of the Los Angeles Chargers. Since he took the mantle as the team’s leader in 2013, Telesco has been a part of seven drafts, made two playoff appearances, managed 23 Pro Bowlers (including future Hall of Famer Philip Rivers), was involved in relocating the franchise from San Diego and will move the team into a brand-new home arena this upcoming season. What Telesco has never faced in his tenure: conducting and managing a draft room from his living room.

Like all of us, Telesco is confined to his home the weekend of the 2020 NFL Draft. And if one thing is certain, this is an experience that will present unique challenges for Telesco and other General Managers around the league. With the draft slated to begin on April 23, ProFootballTalk columnist and award-winning journalist Peter King spoke with the John Carroll graduate about the upcoming draft in his weekly Football Morning In America column.

“It is surreal to be home. I’ve never been home this much in my life,” Telesco told King. “My [three] kids are upstairs in their rooms, doing their school stuff from about 8 to 2:30 every day. We don’t have a basement, so I’m at the dining room table with a Surface, an iPad, a Mac, an XOS computer, working as usual. I’m like a lot of people these days—we don’t have a land-line in our house, so we’ve got to get one put in, at least as a backup right now, in case cell service goes down on draft weekend.”

“We left our building the 17th of March. We’re trying to carry on as we normally would, but it’s been adjustment. I never even heard of Zoom until we had to start using it. A lot of time has been spent on, ‘How are we going to set up and run a draft, logistically, from my house?’ The challenge of it is kind of invigorating. They say it’s a virtual draft. I don’t really get that. Nothing fake about it. It’s the real deal for us.”

With a positive outlook on a situation that has created a shroud of uncertainty and doubt in the minds of many over the course of the past month, Telesco looks to continue his stellar track-record for drafting and developing high-caliber players. As King regards: “Top-five GM poker-player in the league: Tom Telesco. (So you ask: Who is the top one? Easy. Jacksonville’s Dave Caldwell, who keeps the Jags’ picks from his wife.)”

Telesco and later-mentioned Dave Caldwell have something aside from draft-prowess in common: Caldwell graduated John Carroll in 1996.

Telesco and Caldwell, along with Patriots’ Director of Player Personnel Nick Caserio ‘98 make up a strong class of John Carroll alumni showcasing resilience and toughness to tackle the uncertainty ahead of arguably the most nerve-racking, high-pressure days to lead an NFL franchise. They, like us, will be tuned in from their homes, anxiously awaiting the results of one of their greatest challenges of the year. 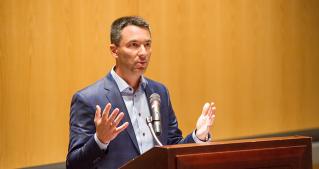 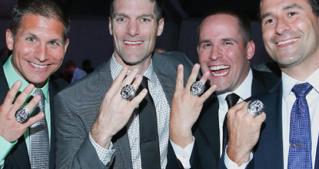 Alumni in the NFL