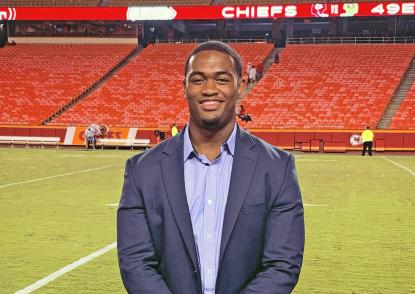 Since graduating in May, Myrick has been working as a scouting intern for the Kansas City Chiefs. In his role, everyday looks different; Some days, Myrick may be responsible for evaluating an NFL or college player, or transporting free agents to and from the airport. Other days, he may be called on to assemble video clips of targeted players or assist the analytics team by charting offensive positioning and results from each practice.

“I like the preparation that comes each day on the job. Things move so quickly in the league that you have to be prepared for every situation. In my role it’s about preparing our decision makers with enough information to make the best move for our roster,” Myrick said. “I like feeling like a part of the operation.”

Being a marketing major, Myrick was able to understand market research and data-driven decisions, which would play a large role in his understanding of the context behind decision making in the NFL.

“My marketing classes prepared me for the extensive amount of fact finding, film prep, and report writing that come with my job,” Myrick said. “Being a marketing major teaches you to be curious and you have to be curious to continue to grow in this industry.”

As a student, Myrick spent a lot of time completing internships within the sports industry that prepared him for his current role. He interned in the marketing departments of the Chiefs, Kansas City T-Bones, and the Indianapolis Colts. During his senior year, Myrick was a game week intern at the Reese’s Senior Bowl.

“During that week I did a lot of the things that I do on a day to day basis at my current job, Myrick said. “I also got to meet scouts from every team across the NFL.”

During his time at JCU, Myrick was a member of the football team, which helped him build relationships with other students, alumni, and community members and ultimately prepared him for the work he would do in the real world.

“Being a student athlete prepared me for the long days that come with working in the NFL. There’s rarely a lot of free time with either and that’s something you have to know you’re signing up for,” Myrick said. “Work-life balance is something that can easily fall out of place if your priorities aren’t straight. You have to love what you’re doing with both situations.”

Myrick took two major lessons away from his time at John Carroll that he applies in his work with the Chiefs today; respect for the whole person and a dedication to your craft.

“People at JCU want to do good for the right reasons, that’s what makes us different. Being around that culture for four years rubs off on you,” Myrick said. “Dedicating yourself to your craft is something that is much easier said than done, but it really helped me fall in love with the repetition of my job. Just learning to be there for your coworkers and seeking out ways to make their jobs easier so we can win a Super Bowl. I’m constantly asking questions and finding new ways to help out because I want to gain experience that I can use later in my career. I learned this at JCU because that's the culture there.” 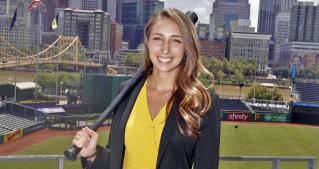 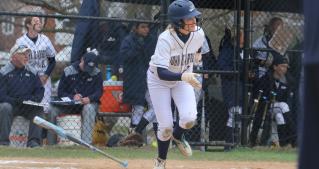