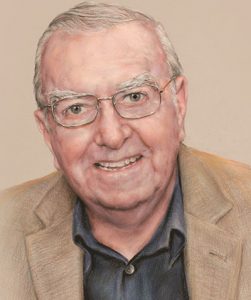 The Mike Cleary Program in Sports Studies was established through the generosity of Mr. Cleary, a 1956 graduate of John Carroll University. He was emeritus executive director of the National Association of Collegiate Directors of Athletics. Cleary held the job of executive director from the association’s founding in 1965 through 2011. He served in the position longer than any other current Division I conference commissioner, coaching organization executive director, or national association leader.

Under Cleary’s leadership, the association rose from a 300-member organization to one with more than 6,500 athletic administrators in about 1,600 organizations throughout the United States, Canada, and Mexico. Prior to serving in the association, Cleary was director of championship events for the National Collegiate Athletic Association with responsibility for administering all national championships.

While serving as NACDA’s executive director, Cleary simultaneously held the posts of commissioner of the Ohio Athletic Conference from 1973-81 and administrator of the Division 1A Athletic Directors’ Association from 1986-92.

While with the Pipers, Cleary hired John McLendon, the first black coach to head an American professional sports team. He later served as fund administrator for the John McLendon Minority Scholarship Foundation, raising more than $1.5 million to provide $10,000 postgraduate scholarships to minority senior-level students who planned to pursue a graduate degree in athletics administration.

A behind-the-scenes person in the field of athletics, Cleary served on committees with the U.S. Olympic Committee and the New Jersey Sports and Exposition Authority. In 1995, he received the award for Outstanding Contribution to Amateur Football from the National Football Federation and College Hall of Fame. In 2009, he was inducted into the National Association of Intercollegiate Athletics Hall of Fame.

“It is difficult to put into words the impact Mike has had on athletics, specifically during his 45 year tenure as executive director of NACDA. His vision and guidance touched every athletic administrator at every level in sport. I’m personally indebted to him because of the opportunities he provided me. I only have one mentor – Mike Cleary. My career as an athletic director for almost 30 years now is a reflection of Mike’s efforts to develop leaders and promote diversity in higher education.”
– Gene Smith, assistant vice president & director of athletics, The Ohio State University

“Mike, who many of us within the industry affectionately refer to as the “Irish Godfather” of college athletics, has made the professionalization of athletics administration his life’s work. For more than a half century, Mike has, most honorably, humbly, and selflessly, provided impeccable leadership, which has dramatically impacted millions of student-athletes, an innumerable number of coaches and support staff, and the various constituent groups that have been forever touched by college athletics.”
– Kevin White, vice president/director of athletics, Duke University

“Through his vision and leadership of forming and directing NACDA and affiliates for more than 50 years, Mike has done more for athletics administration than any person in the history of college athletics.”
– Vince Dooley, former athletics director/coach, University of Georgia

“The naming of the John Carroll University Sports Studies program after Mike is a terrific way to honor one of the giants in intercollegiate athletics. Through our association with NACDA, we have all benefitted from Mike’s vision and leadership during our careers. He has been a mentor to all of us.”
– David Roach, director of intercollegiate athletics, Fordham University

“Mike has dedicated nearly his entire professional life to the enrichment of college athletics and the student-athlete experience. Mike has been unswerving in his dedication and determination to define and promote the integrity of intercollegiate athletics.”
– Jim Phillips, vice president for athletics & recreation, Northwestern University

“Mike is a pioneer in the field of intercollegiate athletics. It’s only fitting John Carroll University names its sports studies program after him. Mike has done so much for so many. I wouldn’t be where I am in my career had it not been for Mike and his support.”
– Kevin Anderson, director of athletics, University of Maryland

“Mike has devoted his life to ensuring the leaders of intercollegiate athletic programs were well informed about the issues confronting our industry. He grew the association from its humble beginnings to what it is today with a focus on learning and networking.”
– Judy Rose, director of athletics, University of North Carolina Charlotte

“Mr. C has had a profound impact on collegiate athletics for more than 50 years and has been personally responsible for the growth and development of generations of collegiate administers, including me. In the world of college athletics, the name Mike Cleary is synonymous with integrity, professionalism, loyalty, and leadership. I’m fortunate to have him as a mentor, colleague, and friend.”
– Lee Reed, director of intercollegiate athletics, Georgetown University

“In 1994, when I became the executive director of the American Football Coaches Association, Mike Cleary had already established himself as one of the premiere leaders in college sports. Mike became my mentor, advisor, and friend. We owe a great debt to Mike for his role in what the AFCA has become during the past 20 years.”
– Grant Teaff, executive director, American Football Coaches Association

“All the young people who will benefit from this program will know in short order Mike Cleary defined what it is to be an administrator in the world of sports management, which encompasses leadership, setting a vision and mission, hard work, anticipating changes, and remaining true to the ideal of doing a job honestly and with character. Mike cares about the future of young people and would always make himself available to them for advice and counsel on advancing their careers.”
– Steve Hatchell, president and CEO, National Football Foundation