Every odd-numbered spring semester since 2001, JCU professors Matt Berg (history) and Andreas Sobisch (political science) have taught a seminar on German history and politics with a focus on Berlin. Students read intensively into subjects that include efforts to come to terms with the Nazi and East German pasts, treatment of minority groups, and foreign and defense policy as preparation for an intensive immersion in Berlin during spring break. The course focuses on the experience of dictatorships and their aftermaths, and how Germans have worked to transform political cultures predicated on intolerance and violence into a commitment to more just and equitable societies after the Nazis and again after the Cold War. 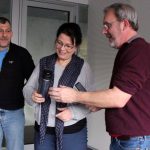 Drs. Berg (l) and Sobisch (r) present JCU swag to Ms. Ulrike Poppe. Poppe was one of the most prominent pro-democracy and human rights advocates among the dissidents who organized against the East German regime from the second half of the 1980s, and was active in the New Forum political movement that attempted to fundamentally reform the German Democratic Republic (GDR) prior to reunification. Arrested no less than thirteen times by State Security officials for her anti-government activities, Poppe now coordinates counseling, relief, and other assistance for victims of the GDR in the federal state of Brandenburg. She has been a friend of the Berlin Program since 2001, and regularly speaks to JCU students.