John Carroll University will host a community forum on the Presidential Primary Process, on Thursday, March 31, 2016, at 7 p.m. in the Dolan Center for Science and Technology, Donahue Auditorium. (Registration is requested. Details can be found at http://www.politicallyspeaking.eventbrite.com.) 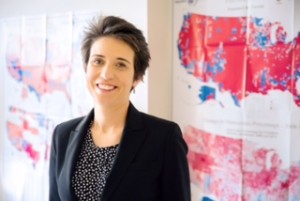 Amy Walter Amy Walter, national editor of The Cook Political Report and a regular panelist for NBC’s “Meet the Press,” will be the keynote speaker. Walter is considered to be one of the best political journalists covering Washington, D.C. In her role at The Cook Political Report, she provides analysis of the issues, trends and events that shape the political environment. Her weekly column appears at CookPolitical.com. Walter is the former political director of ABC News. This event is second of four community forums presented as part of “Politically Speaking,” a series events coordinated by area colleges and universities that have formed a partnership to discuss the upcoming general election and Ohio’s storied role in choosing the next U.S. president. In addition to John Carroll University, “Politically Speaking” is sponsored by Baldwin Wallace University, Case Western Reserve University, Cleveland State University, Cuyahoga Community College, Kent State University. Future events will explore “Why Polling Still Matters” at Kent State University on April 25, and “The Economic Impact of National Political Conventions” at Cuyahoga Community College in June. All events are free and open to the public.