If you missed the talk on November 13, you can watch it here! 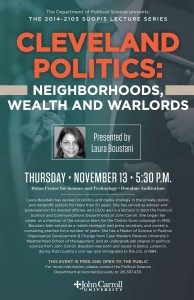 The Department of Political Science presents: The 2014-2105 Suopis Lecture Series

Laura Boustani has worked in politics and media strategy in the private, public, and nonprofit sectors for more than 20 years. She has served as adviser and spokesperson for elected officials and CEOs and is a lecturer in both the Political Science and Communications Departments at John Carroll. She began her career as a member of the advance team for the Clinton Gore campaign in 1992. Boustani later served as a media strategist and press secretary,and owned a consulting practice for a number of years. She has a Master of Science in Positive Organization Development & Change from Case Western Reserve University's Weatherhead School of Management, and an undergraduate degree in political science from John Carroll. Boustani was born and raised in Beirut, Lebanon, during that country's civil war and immigrated to the U.S. in 1984.

This event is free and open to the public. For more information, please contact the Political Science Department at kconnell@jcu.edu or 216.397.4311.