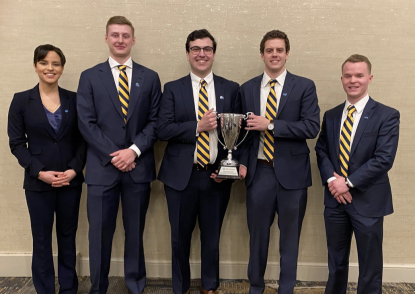 The CFA Challenge Team from the Boler College of Business won the local CFA Institute Research Challenge and will compete at the Americas Championship in New York City on April 20-21, 2020. It is the third-consecutive local victory for the Boler College team.

The CFA Challenge provides students the opportunity for experiential learning through asset valuation and financial analysis.

The event provides hands-on mentoring and intensive financial analysis training. Students form teams to research and analyze a publicly traded company and compete with students from other schools on a local, regional, and global level.

The regional and global competitions are hosted by CFA Institute in the Americas; the Asia Pacific; and the Europe, Middle East, and Africa regions. The winning teams from each regional competition advance to the Global Final on April 22 in New York, where one team emerges as the global champion.

The competition began last fall and culminated on February 21 where the JCU CFA Challenge Team defended its position before a panel of three industry practitioners. The firm under consideration was Materion Corporation, formerly Brush Wellman Inc., a fully vertically integrated manufacturer of beryllium based value added products. The degree of difficulty in determining the intrinsic value of Materion was especially high due to the extremely diverse end markets they serve. End markets spanned everything from aerospace and defense, to medical products, to semi-conductors to the automotive market.

Students on this team have invested nearly 250 hours each on this project. Their next step will be competing in New York in the North American competition in late April, and if successful, on to the global competition. The win marks the Boler team’s third consecutive victory, an unprecedented mark for the group.  No other school has accomplished the feat in the history of local competition. Boler teams have won four of the last six competitions.

With supervision from Dr. Jisok Kang and Executive-in-Residence Tony Aveni, the Boler team’s preparation for the competition, and their subsequent performance during the event, encapsulated the rigorous preparation and determination it takes to be successful in the Boler College of Business.