Centered on our Jesuit mission, the Physics Department teaches you how to think critically and solve problems like a scientist. Studying everything from the behavior of atoms to the physics of new materials in a liberal arts environment will give you a perspective that many other institutions can’t provide. In addition to your technical training, you’ll have superior oral and written communication skills that employers and graduate schools value. 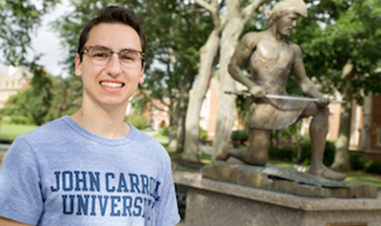 "I was surprised to find my first classes at JCU to have only 20 or so students, which was much easier to manage than a large lecture hall. The faculty and staff make it a point to learn about you not just as a student, but as a person and future professional within this field."

Our programs are flexible, allowing you different options to reach your goals. The physics major is an excellent preparation for a diverse range of careers. For students interested in engineering, we offer both a four-year JCU degree in engineering physics as well as a 3-2 Dual Degree Engineering Program with Case Western Reserve University. Further, our majors pair well with minors in mathematics, computer science, entrepreneurship, and more.

If you're interested in engineering, you can participate in the 3-2 Dual Degree Engineering Program with Case Western Reserve University. You'll attend John Carroll for three years, then transfer to CWRU for two years and receive both a bachelor’s degree from JCU and a B.S. in Engineering from CWRU.

Our more general engineering program, this option is great if you're interested in pursuing engineering development, applied physics, or graduate study in related fields.

The physics B.A. degree provides you with a comprehensive introduction to the discipline and the opportunity to explore some areas of physics in greater depth. It is appropriate if you are pursuing law school, want to teach at the high school level, or are interested in the 3-2 dual degree engineering program with Case Western Reserve University.

The physics B.S. requires an in-depth study of the core areas of physics and a selection of upper-division courses such as thermal physics, atomic and molecular physics, condensed matter physics, or other engineering electives.

The physics B.S. requires an in-depth study of the core areas of physics and a selection of upper-division courses such as thermal physics, atomic and molecular physics, condensed matter physics, or other engineering electives.

... of our students obtain at least one internship before graduation.

Studying everything from the behavior of atoms to the physics of new materials in a liberal arts environment will give you a perspective that many other institutions can't provide.

A physics or engineering physics degree is one of the most flexible, marketable, and respected degrees a student can achieve.

All of our majors carry out a significant research or design project under the guidance of a faculty member. Paid summer research positions are available to students through our Summer Undergraduate Research Fellowship program. 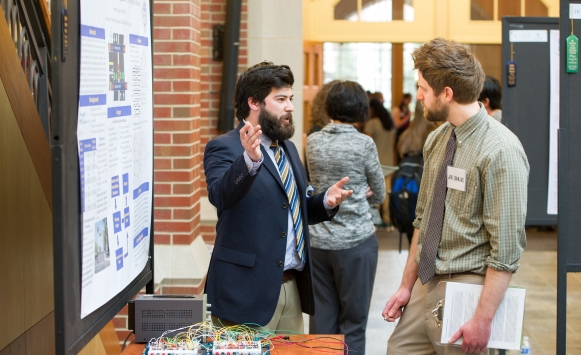 "After graduation I spent a year teaching 8th grade Algebra at Saint Kateri Catholic Schools.  I am currently in my final semester as a Master of Public Affairs and Master of Science in Environmental Science candidate concentrating in Energy at Indiana University's O'Neill School of Public and Environmental Affairs. I am spending my final semester reconnecting with my engineering physics roots at Delft University of Technology in The Netherlands. Throughout my time in this graduate program I have focused on the technology, policy, and economic factors impacting the Shale Gas Revolution and development of a sustainable energy future through the energy transition.

My time at John Carroll and the many lessons I learned have applied well beyond the world of Engineering Physics. The focus upon 'learning how I learn' has allowed me to quickly enter a new field and everyday I have used the problem-solving methods I learned at JCU to tackle complex problems. Following graduation from IU I am looking to enter the world of energy policy working in Washington, D.C., or Ohio."

"Physics is truly one of the coolest subjects anyone can study; it opens up so many career opportunities, it describes why the world works, and it is intellectually challenging and satisfying." Brian is currently pursuing his Ph.D. in Physics at Case Western Reserve University.

“Every college will promise to prepare you for a career, and John Carroll definitely will too. But that’s where most of them stop. JCU, on the other hand, won’t just make you more employable; it will help you become a better person. That’s the cura personalis — care for the whole person — part of the Jesuit philosophy. From the liberal arts core to service to spirituality, JCU really prepares you not just for a career, but for a life well lived. That’s something that may be undervalued in today’s society, but it’s incredibly valuable in the long run.” Spencer's first position, which he accepted before graduating from JCU, was as an engineer working in fire protection for a large engineering firm in downtown Cleveland. But when the opportunity of a lifetime came calling, Spencer moved into an electrical engineer position at NASA Glenn Research Center working on the Orion Mission, aiming to send people to Mars. 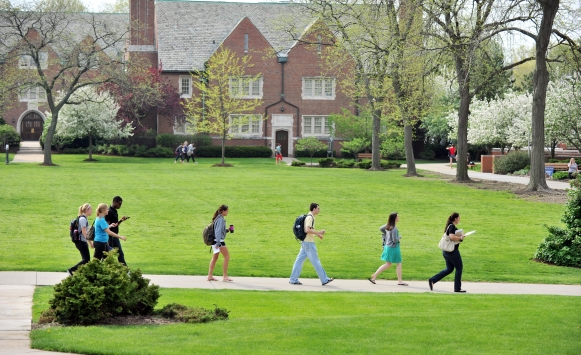 All seminars begin at 4 p.m. in Room E133 of The Dolan Center for Science and Technology.

From Atoms to Stars: The Nuclear Equation of State

In times of yore, most college graduates could believe that they could take a job, perhaps start a business a bit later, and never had to face the prospect of multiple jobs let alone several changes in occupation during the course of their working career. Physics graduates might have occasionally needed to face this prospect but, especially with an advanced degree in hand, could dream about keeping steady hand on the tiller and a steady path to nirvana. But indeed, the world has changed over the past few decades and with it largely the likelihood of this prospect. Three or four employment changes, some of them requiring considerable modification in careers, is increasingly the norm. But I do not come here to hang crepe, but rather to report that, having set your cap on physics means that you have a much higher chance of successfully navigation these shifting seas. It will however require a curious mind and an embedded love of learning. Using my own long career experiences as an example, I would like to engage you in an exercise to form a broad vision of what you can expect in your future and how to identify how to use your opportunities now as an undergraduate to prepare yourself for that future.
Let's converse!

Our current theory of the universe, the inflationary Lambda Cold Dark Matter Universe, predicts many things correctly, but not all.  Concentrating on the cosmic microwave background, the relic radiation of the big bang, I will discuss the model's success, but also some interesting ways in which our observations are not matching the model's predictions.

A discrepancy exists in physics between the way molecular interactions are visualized and how they are commonly experimentally measured. Mechanistically, we often picture one molecule interacting with another and that those interactions can occur in multiple, diverse, or heterogeneous, types of ways.  Yet, the same molecules are experimentally measured as an ensemble, often on the order of 1023, that obscure heterogeneity. Single molecule spectroscopy allows experiments to parallel our molecular representations of physics and resolve hidden heterogeneity. Further, single molecule spectroscopy allows super-resolution imaging on the order of 10’s of nanometers using optics, overcoming the limits of traditional, diffraction-limited optical microscopy and the restrictive imaging conditions of electron or atomic-force microscopy. The power of single molecule spectroscopy and super-resolution imaging were recognized by the Nobel Prize in Chemistry for 2014.  The experimental methods for single molecule spectroscopy will be introduced, along with a discussion of applications of super-resolution imaging to two systems: the organization and movement of biomolecules in cells and redox reactions important in catalysis and corrosion.

We review our progress in three areas of research involving interactions between light and matter.  First, we visualize the forces and torques imparted on a nanoscale dielectric sphere moving in the evanescent light field of a thin optical fiber, and discuss their relationship to the spin and orbital angular momentum carried by the light.  Second, we describe a recent experiment involving entangled two-photon interferometry, and show how an extension of this work allows for the extraction of amplitude and phase information from the two-photon quantum wavefunction.  Finally, we discuss an experiment where information relating to the history of a light beam’s polarization evolution may be encoded onto its overall phase.