Onward: 30 Years of Leading By Example 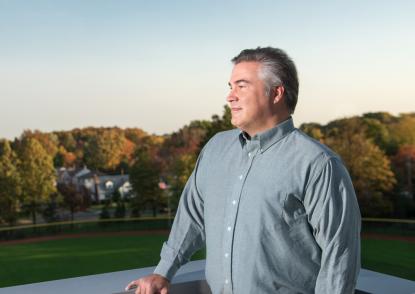 This story originally appeared in Onward: John Carroll Alumni Magazine, which was mailed in early November.

First one in, last one out. It’s standard operating procedure for Chris Wenzler ’90. In the fall, hours before teams hit the field to warm up, he crosses the street with a cart full of equipment. Often, long after the crowds have gone home, after the tower lights have shut off at Shula Stadium, the glow of the press box from South Belvoir indicates that his day of covering the Blue Streaks is not yet over.

Long hours, road trips, entire weekends spent away from home. Covering Division III athletics at a high level can present significant challenges. But as the man who has served through nearly one-third of the first 100 years of John Carroll athletics will tell you, it’s all part of the job. And as his colleagues, work-study students, and alumni will attest, there’s no better man for that job.

Wenzler's office is tucked on the second floor of the D.J. Lombardo Student Center. It has a comfortable feel, a lived-in quality. That’s because it is the central hub for Wenzler and more than three dozen work-study students who find their way in and out throughout the day. The student workspaces are surrounded by files, photos, and books.Closets and file cabinets throughout the four-room suite are packed to the seams, each one documenting a separate aspect of JCU’s ten-decade journey in athletics.

In this space, Chris acts as teacher, shepherding students through writing, compiling game notes, designing programs, searching for photos, and reviewing broadcast tape. It is a learning lab; one that challenges an accounting student to write a game preview or a political science major to lay out sections of a program.

The skills learned by students in Wenzler’s office are critical to the operation. As technology developed over the years, the expectations grew. The wait for faxed box scores from road events was replaced by live streaming. Trips across the country demanded attention. In recent years, content created by sports information represents the only coverage for players and coaches, because of the constraints on traditional media.

Covering all 23 varsity sports takes on increased importance as a result. “He works to give everyone equal coverage, because he knows that all student athletes work hard, says Melissa, his wife of 27 years. With that mantra in mind, punctuality, commitment, energy, and teamwork become key traits for a successful member of the team.

As he often puts it, the broadcast might be the only time a parents sees their son or daughter compete. A game story might be the first thing a prospective student reads about JCU. It all matters, equally.

Wenzler’s staff doesn’t simply include a front row seat to John Carroll sporting events. It means an invitation into the Wenzler family. Melissa was a longtime part-time assistant for Chris, providing any assistance she could before the birth of their two children, Madeline and Oliver. She now serves as an assistant director of enrollment, truly making John Carroll’s success the family business.

From cookouts to game nights, to staff outings to Whirlyball and golf, a work-study position in sports information means immersing yourself in the experience. “The kids in the office have always been family to us,” Melissa says. “Seeing them grow is one of the most rewarding parts of the job for him.”

While his work has impacted thousands of student athletes, employees, and colleagues, a particular point of pride for Chris is his service work. After attending his first in 2007, Chris has gone on nine immersion trips as a staff member at John Carroll; he’s served in Jamaica (five times), Ecuador (three times), and Guatemala. On campus, he spearheaded Streaks to the Max, in partnership with Max Cure Foundation. Each year, the events bring together the creative efforts of student athletes to raise money for families affected by pediatric cancer.

For his efforts, he received the Bob Kenworthy Community Service Award in 2018. That same year, he was diagnosed with multiple myeloma. Even as he fought his own cancer fight, he turned his eyes toward 2019, and an opportunity to return to Ecuador for another immersion. Shortly before departing, he found out his cancer had returned. His next battle was about to begin. His next move: get on the plane to Ecuador.

As the first century of athletics at JCU closes, it is not a simple task to measure the impact of a man in his fourth decade at the University. For alumni like Sean Fagan, the impact of Chris Wenzler on his life is immeasurable: “ I don't know where I would be without Chris Wenzler. I learned many lessons in my days working for Chris — sometimes the easy way, and sometimes the hard way, as I am sure he could attest. That's the great thing about him, though; he is always pushing students not just to succeed, but more critically, to grow into better people. And isn't that the Jesuit ideal–to be men and women for others?

You won't find many people that live it the way he does. 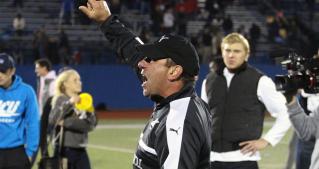 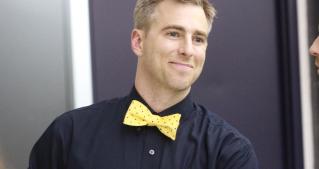 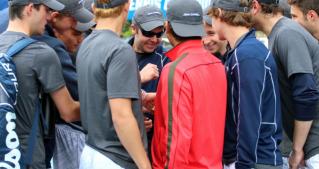