“I know you join me in our desire to strengthen the University for future generations, and I am grateful for all you have accomplished to help put us on this path.”
— Rev. Robert L. Niehoff, S.J. 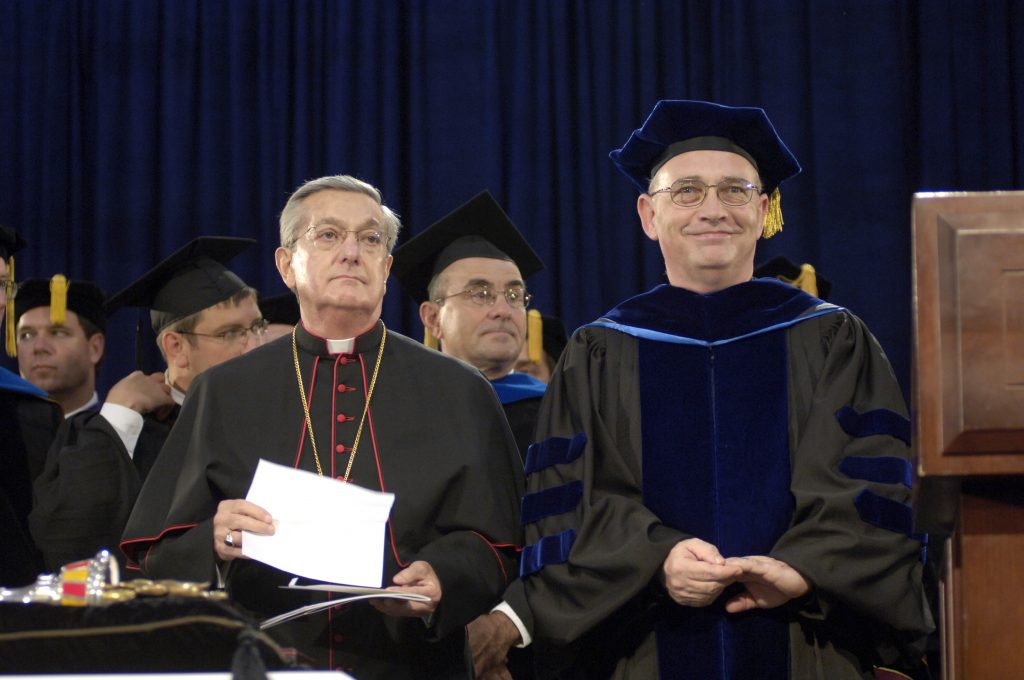 In 2005, at his inauguration as the 24th president of John Carroll University, Rev. Robert L. Niehoff, S.J., challenged the Carroll community to engage the world more deeply. This was an integral principle that guided his leadership for 12 years. He encouraged members of the JCU community to pursue diversity, peace, justice, and the Kingdom of God by opening themselves wholeheartedly to others, especially those on the margins of society.

In October 2006, the University was honored to host Rev. Peter-Hans Kolvenbach, S.J., the late superior general of the Society of Jesus, during his visit to the United States and the Detroit Province. Fr. Niehoff and the Jesuit community welcomed the Father General to campus, where members of JCU’s Board of Directors were joined by board members from other Jesuit apostolates in the province and JCU faculty and staff, to meet and hear from Fr. Kolvenbach.

In October 2007, Fr. Niehoff celebrated Mass in the chapel at the Church of the Gesu to honor the 25th anniversary of his ordination to the priesthood. A reception in the Dolan Center for Science and Technology followed. 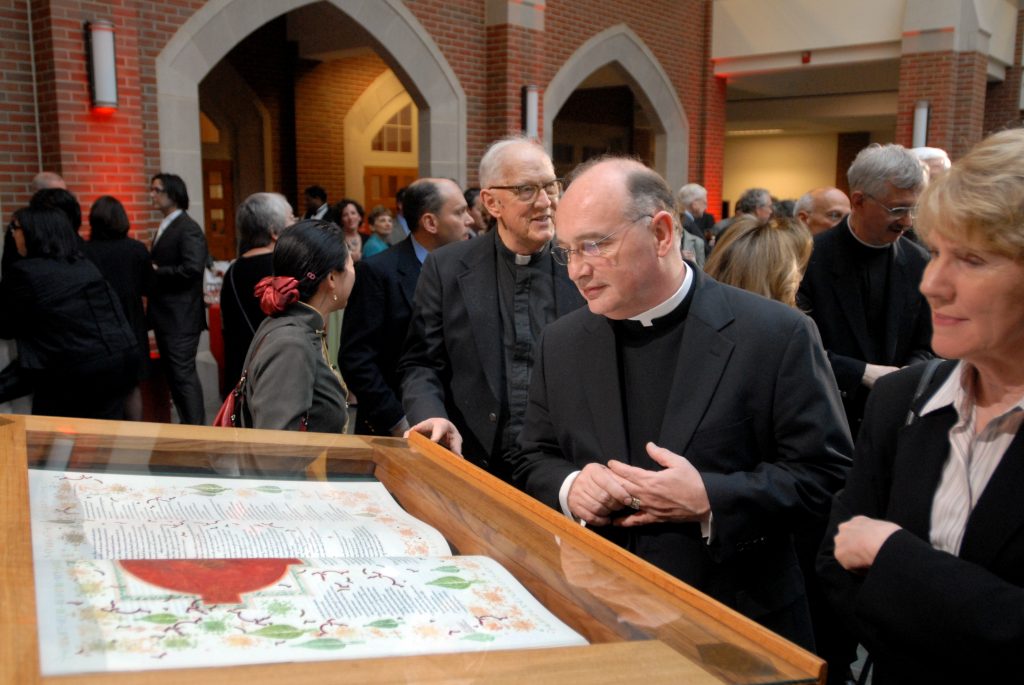 The Saint John’s Bible, the first handwritten and hand-illuminated bible in 500 years, debuted on campus in the Grasselli Library in April 2008. It was the first opportunity to view original pages from the historic manuscript. An identical bible was presented to Pope Benedict XVI. The seven-volume bible is a gift in honor of John Pellegrene ’58, a retired Target Corporation executive vice president.

In April 2011, Fr. Niehoff established a diversity steering committee, charging it to set institutional goals, monitor and assess progress in attaining those goals, offer guidance to campus, and examine models to create the Office for Institutional Diversity and Inclusion. Terry Mills, Ph.D., who was hired as JCU’s first chief diversity officer, oversees the office, which is committed to creating a campus culture in which our differences are explored openly and respectfully. 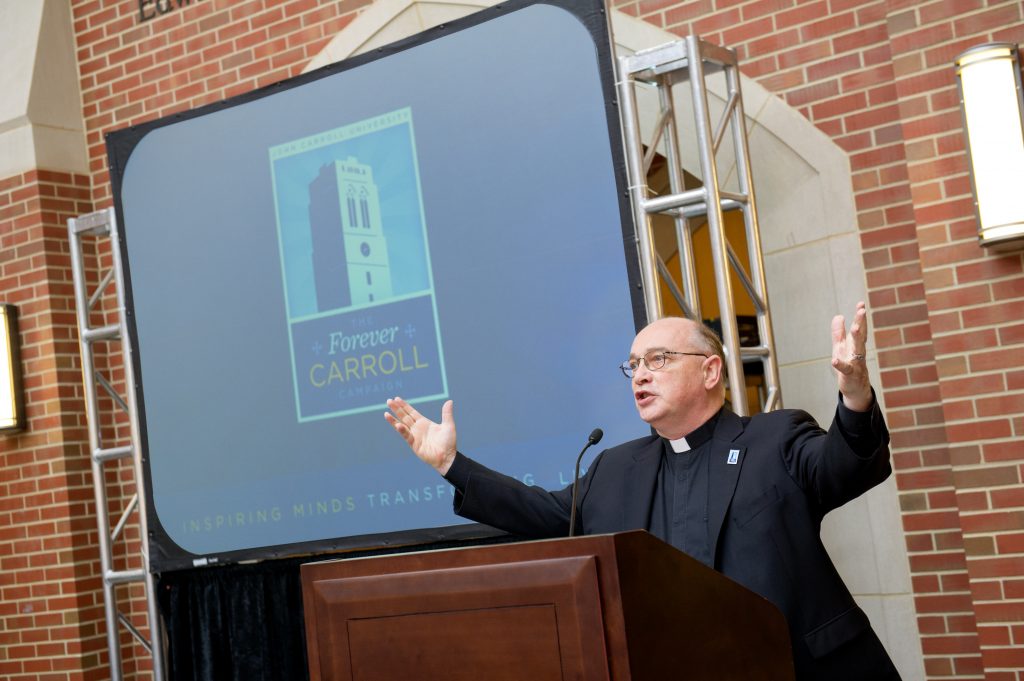 In December 2009, after thoughtful contemplation, planning, and discussion – and in honor of the University’s upcoming 125th anniversary – John Carroll launched the quiet phase of the Forever Carroll Campaign. Its theme was “Inspiring Minds. Transforming Lives.” It was a bold decision to launch a campaign during an economic recession. But seven years later, alumni and friends surpassed the $100 million goal, raising more than $104 million to invest in students, enrich the academic experience, build on the University’s Jesuit heritage, and enhance the student experience.

In April 2011, Fr. Niehoff established a diversity steering committee, charging it to set institutional goals, monitor and assess progress in attaining those goals, offer guidance to campus, and examine models to create the Office for Institutional Diversity and Inclusion. Terry Mills, Ph.D., who was hired as JCU’s first chief diversity officer, oversees the office, which is committed to creating a campus culture in which our differences are explored openly and respectfully. 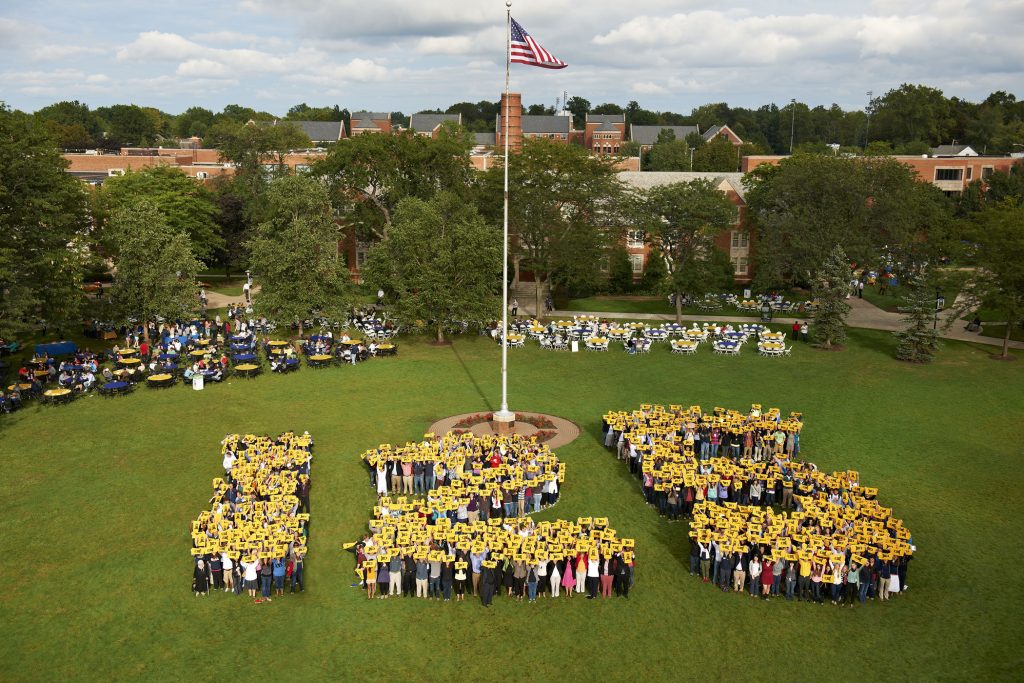 John Carroll celebrated its 125th anniversary in 2011 with a yearlong series of events, including anniversary-themed Ignatian Heritage Week, Celebration of Scholarship, alumni immersion trips, Founders’ Day, and a gala to close out the year. That year, the JCU community reflected on many of the University’s achievements and its Jesuit Catholic tradition of excellence.

In August 2012, the football team traveled to Dublin, Ireland, to play St. Norbert College from Wisconsin at Donnybrook Stadium. The trip, which was partially funded by alumni, presented an enriching opportunity few schools had and included memorable experiences. Fr. Niehoff celebrated a special Mass at Newman University Church. Dan Rooney, the late U.S. Ambassador to Ireland and chairman emeritus of the Pittsburgh Steelers, greeted players. And a reception, which was sponsored by Frank ’63 and Judy Grace, was held at The National Concert Hall. 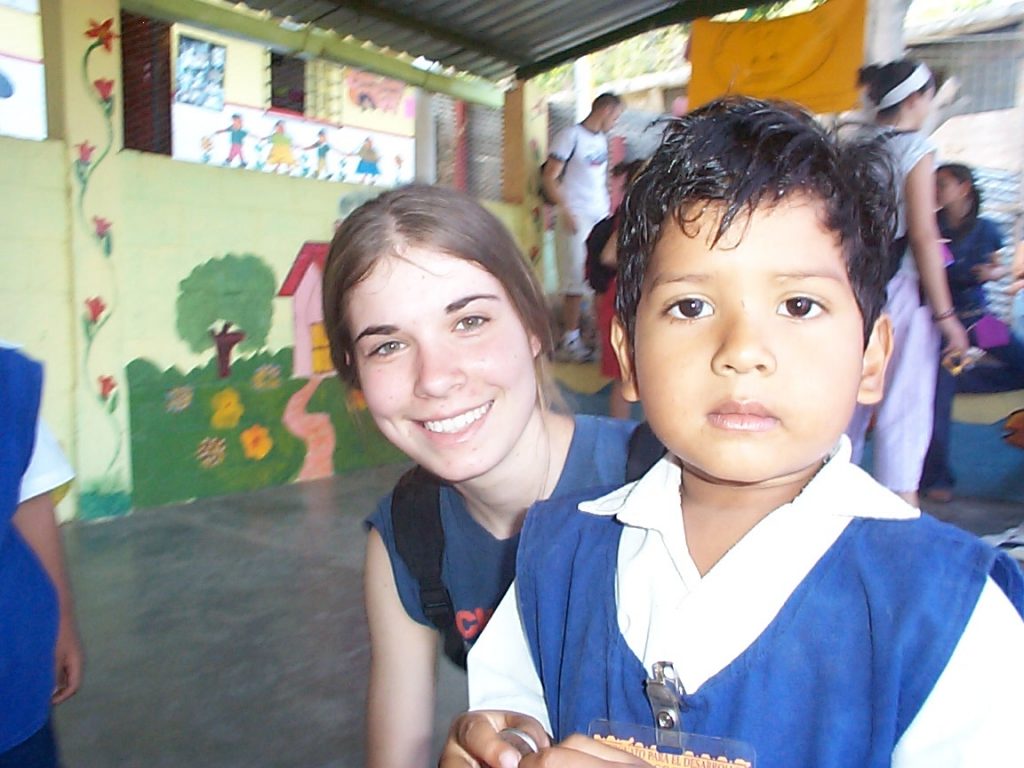 On a deeply moving and spiritual trip in November 2014, Fr. Niehoff celebrated the 25th anniversary of Jesuit martyrs and their companions in El Salvador. The heart-wrenching event invigorated the Jesuits’ commitment to global justice, particularly for Jesuit colleges and universities in the United States. For those who traveled with Fr. Niehoff, the experience was life altering and deepened their commitment to advancing faith that does justice.

Fr. Niehoff traveled to Washington, D.C., in September 2015 to join the crowd that welcomed Pope Francis to the United States and watch the pope’s address to Congress from the South Lawn of the U.S. Capitol. The event was a culminating experience of Fr. Niehoff’s life.

In May 2016, Fr. Niehoff became the longest-serving president of John Carroll, stabilizing leadership and directing a consistent global vision for the University. 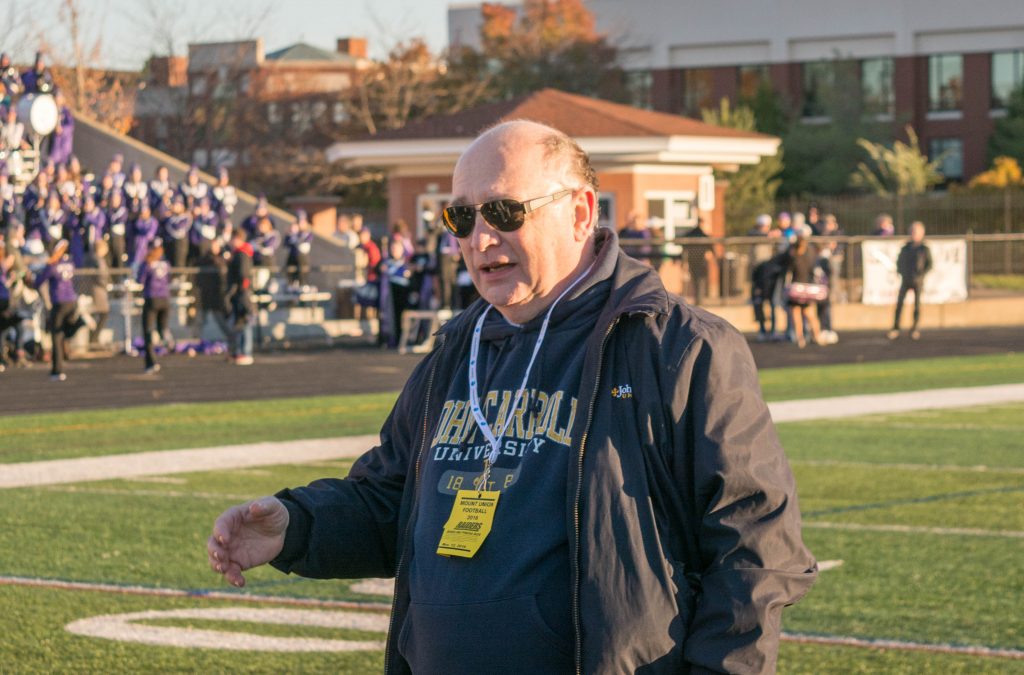 In November 2016, the football team defeated Mount Union for the first time in 27 years and received national recognition for the accomplishment. Fr. Niehoff shared in the exhilarating victory with players, coaches, alumni, and students. The game was part of one of the most successful seasons in the program’s history, as it reached the semifinal round of the NCAA tournament. The entire team was named Collegiate Athlete of the Year at the 17th Annual Greater Cleveland Sports Awards ceremony. 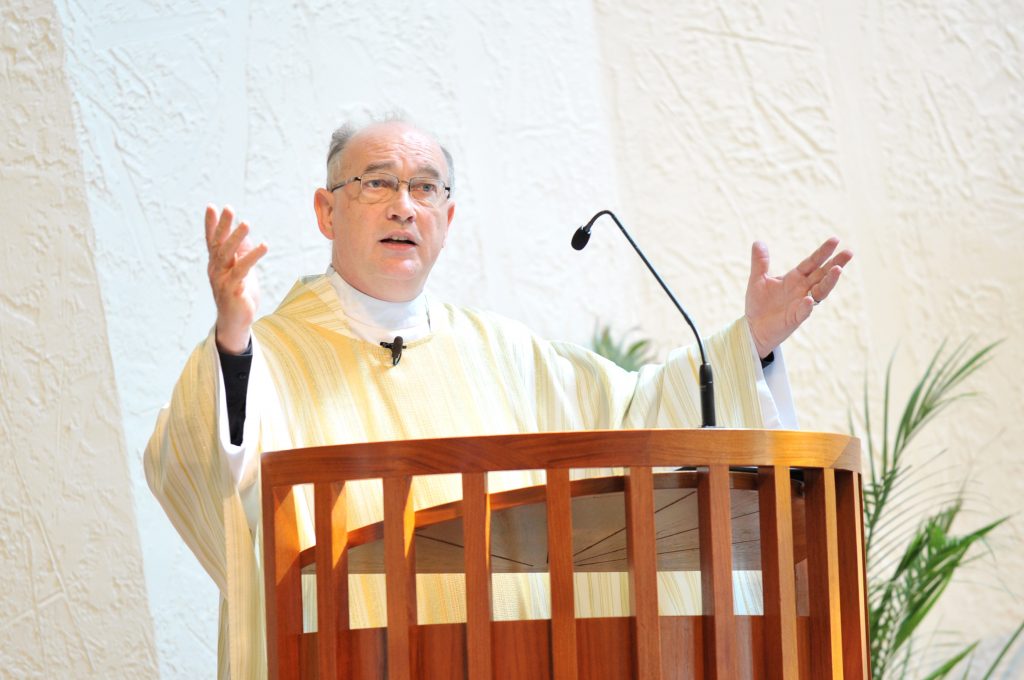 “I’ve enjoyed knowing and working with Fr. Niehoff during the past 12 years. He has truly been a guiding light and source of leadership as the University has gone through some trying times. We’ve been lucky to have him as our president.”
— Jim Mackey ’71