This award is given to the graduating senior who has been voted by his or her senior class as most deserving of this honor. The award is presented at the Commencement ceremony in May. 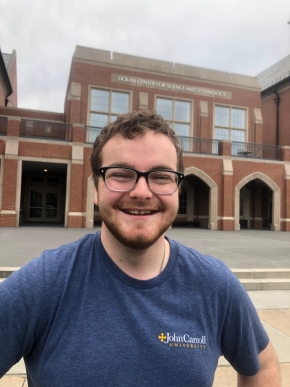 In his senior year at John Carroll, Bob Beaudry was president of Alpha Sigma Nu and the Boosters’ Club. He was a member of the Sodality, now known as Carroll Faith Communities (CFCs), for his four years at John Carroll University. He was a dynamic student leader who was included in Who’s Who in American Colleges and Universities for two years.

After graduation, Bob continued his studies at Georgetown University Law School. In the spring of 1951, on his way home to Chicago for a visit, he was killed in an airplane crash near Pittsburgh.

An editorial in the Carroll News for April 6, 1951, reflected the student reaction to his death:

“Those of us who knew Bob Beaudry – you couldn’t go to school long without knowing him – were shocked by his death. Because of his youth we thought that his life ended without achieving final success. We were wrong…Bob had a job to do and did it well. He showed us how to live…After all, Bob Beaudry spent the last years of his life working unselfishly for each of us. That should make us all pretty humble.”

Since Bob Beaudry’s name and memory represented that intangible quality — school spirit — it was decided to build a memorial. The shrine to Our Lady, Mother of Grace, was made possible by contributions from Bob’s family and friends.

The Shrine was dedicated on October 28, 1951, as the main event of Parents’ Day that year. Among the hundreds that attended the dedication of the Shrine were Bob’s mother and fiancée. The Shrine is located between Bernet Hall and the Boler School of Business.

In 1951, the Sodality (now known as Carroll Faith Communities) initiated the “Robert Beaudry Man of the Year Award,” in honor of their deceased member. The award, from that time onward, was to be given to a graduating senior who exemplified a commitment to leadership and faith. When John Carroll University became a coeducational institution, the award, open to both men and women, was renamed “The Beaudry Award.”

The award honors an individual who exemplifies the ideal of Jesuit education: a man or woman for others.

The Beaudry Award recognizes outstanding service in the following areas:

Any student, faculty, or staff member may nominate an individual.

The Beaudry Award Committee, comprised of faculty, administration, and staff representatives from a variety of departments, reviews all nominations and determines a final voting ballot based on the criteria stated above. Only graduating members of the senior class will be permitted to vote.