Ohio Campus Compact is a statewide non-profit coalition of 47 college and university presidents and their campuses working to promote and develop the civic purposes of higher education. Visit ohiocampuscompact.org for more information.

The David Hoch Memorial Award for Excellence in Service was designed to recognize and honor the outstanding work in service-learning and/or civic engagement done by a faculty or staff member at an Ohio Campus Compact member institution. This award is named for the late David Hoch, the Dean of Honors at The University of Toledo, who served as the Director of Service Learning from 1999-2005. Hoch was instrumental in initiating and nurturing the role of civic engagement at The University of Toledo, not only in the Honors Program, but in residence life and other departments as well. His guidance helped grow academic service-learning, student-led community service, and the presidential emphasis on broader civic engagement. This award is given annually to one faculty or staff member from an Ohio Campus Compact member school. To be considered, the nominee must demonstrate outstanding leadership in furthering the civic mission of the institution. The president of the college or university must nominate each candidate. 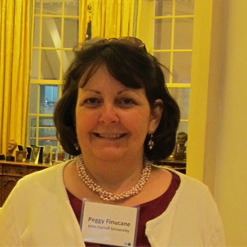 Since 2006, Dr. Peggy Finucane has served as director of JCU’s Center for Service and Social Action, while also serving as a faculty member in the Tim Russert Department of Communication & Theatre Arts. In this capacity, she has broadened and deepened the scope of service and service learning across campus and significantly increased the University’s engagement with the Cleveland community.

As a faculty member at JCU, Dr. Finucane has integrated service-learning into several courses she has taught, including Cultivating Community, a class dedicated to learning about the economic, political, historical, and religious complexities of an urban neighborhood in Cleveland. The class culminated in a service day, which has evolved into the Jesuit Day of Service that now includes the 10 Jesuit institutions in Northeast Ohio. Over 700 people are expected to participate this year.

Under Dr. Finucane’s leadership, JCU has been named to the President’s Higher Education Community Service Honor Roll for six consecutive years. In 2013, JCU was selected as a Presidential Award Finalist, one of 14 colleges and universities nationwide to receive this recognition.

Among Dr. Finucane’s many accomplishments:

In 2012, CSSA celebrated 20 years of making service an integral part of the John Carroll experience—of fulfilling the Jesuit mission of being men and women for others. Last year, approximately two-thirds of John Carroll students dedicated 70,000 hours to service activities, including about 1,000 students who chose weekly service opportunities at 75 sites throughout Cleveland.

“David Hoch Memorial Award winners exemplify the important role higher education plays in helping to envision and create the type of society and world we all want to live in,” stated Richard Kinsley, executive director of Ohio Campus Compact. “Dr. Finucane exemplifies this ethic. She is a consummate professional with a long personal history of service to others and a tireless commitment to the Cleveland community.”