The John Carroll University Staff Community Service Award is to recognize individuals for outstanding service to the greater Cleveland community in representing a “faith that does justice.”

Nominees should be John Carroll employees who have made a consistently positive impact on the community through voluntary service and have a demonstrated commitment to the community, to social justice, and to the values of Jesuit education. The nominee must be a current, full-time employee who has been with the University for at least 2 years. Members of the faculty are not eligible for this award; a separate award, the Curtis W. Miles Faculty Award for Community Service is available.

The award will be given annually to one staff member. Recipients will receive a $1,000 award stipend and acknowledgement on the CSSA website. 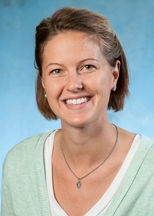 Julie Myers is the Assistant Director of Campus Ministry, a job that requires the wearing of many hats. Among her responsibilities are coordinating retreats, planning Immersion experiences, and spearheading social justice initiatives. After graduating from John Carroll in 2009, Julie moved to Colombia, South America for three years to do human rights accompaniment work with rural communities through the Christian Peacemaker Teams. She learned a lot about nonviolent resistance movements and was constantly inspired by the way God works through the marginalized. Julie is a member of the Catholic Worker community on the near west side of Cleveland.   Julie is extremely knowledgeable in the areas of service and social justice and works diligently to challenge students and the rest of the JCU community to live “a faith that does justice.” Julie not only crosses borders through immersion trips where she accompanies students to see and experience life from many different perspectives, she also builds bridges, fosters relationships and connects with people on a heart level. We congratulate Julie on being named the 2020 recipient of the John Carroll University Staff Community Service Award.

** This is a sample letter only. Information in this letter is not guaranteed to be factual. **

It is with great pleasure to nominate Ms. Mary Nominee for consideration for the 2016 John Carroll University Staff Service Award in recognition of her outstanding leadership and tireless efforts in addressing and raising awareness about issues of hunger in our community.

The numbers are staggering. In 2014, the Cleveland Food Bank provided 32.9 million pounds of food to 618 hunger programs in six Northeast Ohio counties. Nearly 35% of recipients were children under eighteen years of age and 15% were the elderly. For many recipients, 79% of whom live below the poverty line, every month can bring with it challenging decisions about whether to pay the rent or seek needed medical care, to put gas in the car or healthy food on the table, to purchase warm gloves or school supplies for a child.

But what is also staggering is how the efforts of one person, one particular person, can truly make a difference in addressing this problem. Mary Nominee has volunteered at the Cleveland Food Bank since moving to the area in 2005, where she has just completed her 800th hour of volunteer service. At the Food Bank, Mary has provided support in multiple ways, from sorting and repacking donations and preparing hot meals to making deliveries, distributing literature, and even recruiting other volunteers to assist. In the spring of 2013, Mary headed the Volunteer Committee for Feeding America, a comprehensive nationwide study conducted every four years to analyze hunger in our communities. In this capacity, Mary managed the coordination and scheduling of volunteers at food pantries and soup kitchens across the area, who surveyed hundreds of clients and collected valuable information for the study.

In addition to this work, Mary has been deeply committed to and involved in the local foods initiative in the Cleveland area. She sits on the board of Local Food Cleveland and serves as advisor to the Central Community Cooperative Project, an effort to start a food cooperative in Cleveland’s Central community (where there is such a dearth of grocery stores that it is actually easier for residents to buy a Big Mac than an apple). At JCU, Mary has been an annual participant in the Center for Service and Social Action’s Jesuit Day of Service event, as well as being a regular presence in JCU’s own community garden, where she could often be seen spending her lunch hour in weeding, watering, and tending the garden.

Mary strives to utilize every available “pulpit” in her efforts to raise awareness about this issue. She has presented programs about hunger in Cleveland at her church and to various social groups and clubs. She has organized letter-writing campaigns on behalf of funding for food banks targeting state and federal government officials. She has walked in JCU’s Footprints for Fatima 5K and advertised and volunteered with JCU’s summer lunch program partnership with the Jewish Federation of Cleveland. In addition, somehow, Mary also finds time to serve as an active member of her church and to tutor children in reading at the Intergenerational School in Cleveland.

Because of these efforts, Mary has earned not only the award for “2013 Volunteer of the Year” at the Cleveland Foodbank, but also the respect and gratitude of those for whom and with whom she serves, her church family, her neighborhood residents, and her peers here at JCU. As one of those peers whom Mary has inspired and motivated to service, I strongly urge you to award her the 2016 John Carroll University Staff Service Award.