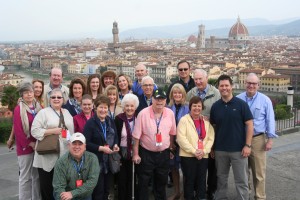 On Wednesday, April 2, 23 members of the John Carroll University alumni community including Dave Vitatoe ’00, Director of Alumni Relations and Dr. Paul Murphy, Director of the Institute of Catholic Studies and Vice President for University Mission and Identity embarked on a 9 day excursion through the Tuscany region of Italy. Alumni ranged from the class of 1963 to the class of 2007 and reside throughout the US. The itinerary was carefully planned by AHI Travel, an agency based in Chicago Illinois that specializes in group travel programs. Each morning, breakfast was served in the hotel, lunch was included on most days, and dinner was included on several evenings. Even the weather seemed to have been planned out perfectly, as only the first day or so we experienced clouds and a bit of drizzle and the remainder of the trip was beautiful sunshine and highs in the low to mid 70s. Throughout the week we visited many surrounding cities and towns including Florence and Siena with our tour director. Transportation was provided by a chartered shuttle bus and as we traveled our tour guides Nadia and Natasha enlightened us with local history and modern life in the region. 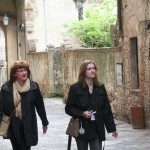 All travelers arrived in Colle di Val d’Elsa on Thursday, April 3 and checked in to the Palazzo San Lorenzo Hotel where we stayed the duration of the trip. Following our arrival we had time to unpack, relax and explore the town before meeting for a guided tour of Colle di Val d’Elsa later in the afternoon. Nadia Magaro, our tour director for the trip, led us through the narrow streets of Colle and pointed out historical landmarks, churches, bell towers and plazas. Colle di Val d’Elsa means “Hill of Elsa Valley” as the Elsa River crosses the town. Our hotel was located in the upper portion of the town, referred to as Colle Alta and the lower section referred to as Colle Basa, is known worldwide for its crystal production.

After touring the town, we gathered in the bar area of the hotel for a welcome reception where we were able to meet and get to know all the travelers including John Coyne ’63 and his wife Cynthia, John Cunningham ’76, Christine Kramer ’86, Herbert Kramer ’80 and his wife Nancy Kramer, Barbara LaRose ’12G, Linda McDevitt ’64G, James McDonald ’79 and his wife Mary Keith, Constance (Stefani) Perkins ’64G, Maryanne Petkac ’08G and her husband Joseph Petkac, Gordon ’64 and Carolyn ’87G Priemer and their daughter Molly, Anthony Skwiers ’63 and his wife Sharon, and my guest, my mom, Mary Beth Bush. Following the welcome reception we dined in the hotel restaurant. Just from this first evening it was evident that this was going to be a wonderful group to travel with, as this and every meal was filled with storytelling, laughs, fellowship and a great sense of community. 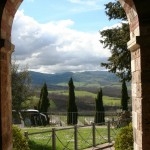 After breakfast on the first morning, we boarded the shuttle to visit Pinzani cheese farm where Pecorino cheese is produced using sheep’s milk. As we toured the production facilities we witnessed how the milk was transformed into cheese and where it was stored and aged to perfection. Following the tour we sampled several of their cheeses with a drizzle of honey paired with a glass of wine.Our next excursion was to the hilltop village of Casole d’Elsa, originally and Etruscan settlement where more than 40 Etruscan tombs have been discovered. We met with a local tour guide who highlighted the town’s buildings and took us through a museum not yet open to the public, which displays Etruscan artifacts and renaissance art. We also explored the church, Collegiata Santa Maria Assunta, and viewed the frescos that still remain on the walls.

We then returned to Colle Basa for lunch at the Ristorante Molino il Moro, which had been transformed from a wheat, olive pressing and paper mill from the 1100’s. This was evident from the mills structures still present and the water that rushed under the building.

After lunch some took the shuttle and returned to the hotel while others walked to the crystal museum in town.

Upon returning to the hotel, Dr. Paul Murphy provided an interesting and informative lecture on the historical culture that shaped the area during the Renaissance, which gave us the perfect foundation for the upcoming excursion to Florence. Dr. Murphy also explained the term, campanilismo, having great pride for one’s city or bell tower. All of the medieval towns that we visited had an identifiable tower which were constructed not only to provide a look out for defense but also provided a symbol of identity for the residents and a sense of community. Similar to the sense of pride, identity, and community that the Grasselli Tower provides on JCU’s campus. That evening many travelers gathered for dinner at the nearby Pizzaria Ristorante iL Torrione, within walking distance of the hotel. 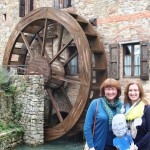 Our first excursion was to the medieval hilltop town of Massa Marittima where we were led through the town by a local tour guide. First we visited a museum of medieval knight armor, artifacts, and cross bow weaponry. As we continued our walk we came upon the Tower of the Candlestick or Torre del Candeliere unfortunately it was an overcast day as this area usually provides a vantage point of the Tyrrhenian Sea over the countryside. Our tour continued down a steep and narrow walk way down to the Piazza Garibaldi to visit the Cathedral of Saint Cerbonius and hear the bells ring out at noon.

After boarding the shuttle we drove through the winding roads through the mountains and hills for lunch in the countryside at the Agriturismo il Mulino Delle Pile, which previously had been a water mill.

That afternoon we visited the Sword in the Stone in a church. Just as we arrived the clouds began to part and the bright blue sky and sun gave us the perfect opportunity to tour the Abbey of San Galgano located nearby, which all that remains are the walls, no floor, roof or windows.

As we returned to the hotel we gathered for an Italian art history lecture led by Leila Magaro. We then had a free schedule for the remainder of the evening, some travelers dined at a nearby restaurant or at the hotel. 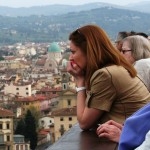 On Sunday, we embarked on our day long visit to Florence. We first arrived at Michelangelo Square which provided panoramic views of the entire city, the Arno River, and cathedral dome. This city was hustling and bustling with activity from the half marathon taking place throughout the city. Our tour guide led us through the capital city of Tuscany’s remarkable architecture and the Cathedral of Santa Maria del Fiore. We then had free time to attend mass at Santa Croce, visit the Galleria dell Accademia, home to Michelangelo’s “David,” visit the Uffizi gallery, walk over the Ponte Vecchio, or shop in the high end stores. Later in the afternoon we returned to the hotel where dinner was served. 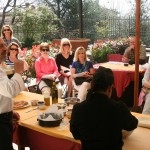 On Monday, our first jaunt was to the 14th century town of San Gimignano. We were led by a local tour guide in the morning and then had time to stroll through the town and take in beautiful views of the rolling hillside, vineyards and cypress and olive trees in the distance. Next we continued to the Chianti wine region to the Il Fondaccio dai Dottori restaurant where the chefs treated us to a cooking and baking demonstration of gnocchi, guinea fowl and sbriciolata which was our lunch and dessert as we dined alfresco. After lunch, we walked to the town of Castellina where we stopped in to “the best” gelato shop for a tasting and toured the town of Casetellina. That afternoon, we returned to the hotel and met with two local Colle residents and they shared their life experiences and gave us a sense of what modern day life is like from their perspective. 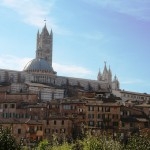 On Tuesday morning, we set out for Siena and met our guide at the Basilica Cateriniana San Dominico. There we toured the Basilica, the original had been dedicated to Saint Dominic in the early 1200s. Later in the 1400s a new church was built near where St Catherine was born. Following the canonization of St Catherine in 1461 many important relics and manuscripts were transferred to this church including the Sacred Head which is still on display in the Basillica.

After touring the Basillica we continued our tour of Siena, walking through the narrow, winding and hilly streets. As we observed the gothic architecture we came upon the headquarters of the Banca Monte dei Paschi di Siena, the oldest surviving bank in the world founded in 1472.

Next, we toured the Duomo, Siena Cathedral, which was designed and built during the 1200s. The façade is detailed white and black marble, with a bell tower and a dome which looked absolutely stunning against the bright blue sky that day. Inside were numerous black and white striped marble columns, the intricately etched marble floors and the interior of the dome.

Afterward we stopped at the Piazza del Campo, Siena’s town square, which they say “all roads lead to the Piazza del Campo.” We then learned about the horse race that is held twice a year in Siena providing fun and friendly competition among the city sections of Siena. Each section of the city is represented by a horse in the race. The winning horse is then celebrated by the residents of that section as they display their flag outdoors proudly until the next race.

We then had a few hours to discover Siena on our own, grabbing lunch in a café, shopping or just taking in the sights and sounds in the square. Our next stop that day was at Castello Monsanto winery for a tour and a wine tasting. 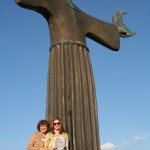 On our final day, and we had the opportunity to leisurely explore Colle di Val d’Elsa. That evening our farewell festivities were held Il Molino di Grace, the estate and winery of Frank Grace ’63. As we arrived we were greeted by Frank’s son, Tim, who currently runs the winery. Father Niehoff also joined us that evening along with Doreen Riley the Vice President of University Advancement, JCU Board of Directors; Dave Short ’81, Hal Hawk ’81 and his wife Diane, Jack Winchester ’67 and his wife Laura as well as other alumni and friends; Carl Hughes ’79, Sara Ballinger, Mary Jane Knapp and student Drew Wagner ’15 who is currently studying this semester in Milan. Tim gave us a tour of the wine production and history of the winery and led us through the vineyard to the tasting room, where we sampled their wines. Next, we continued through the vineyard to the famous St. Francis statue which served as a perfect photo op for all. Frank and his wife Judy graciously welcomed us to their home to enjoy wine and hors d’oeuvres outdoors before retreating indoors to their castle-like estate. We dined at 3 large tables that were elegantly set with beautiful hydrangea center pieces and a bottle of Il Molino di Grace, Chianti Classico at each place setting as a favor. Over dinner we recounted our amazing journeys through the Tuscan region and our reluctance to return home the next day and leave this beautiful area.

Many travelers departed for the airport and home, some had opted to extend their stay for a few more days and explore more of Italy on their own. One thing is for sure, this trip provided a remarkable lifelong learning experience with memories that will last a lifetime as well as an opportunity to connect and form friendships with those in the John Carroll community.

See all the pictures from this wonderful trip 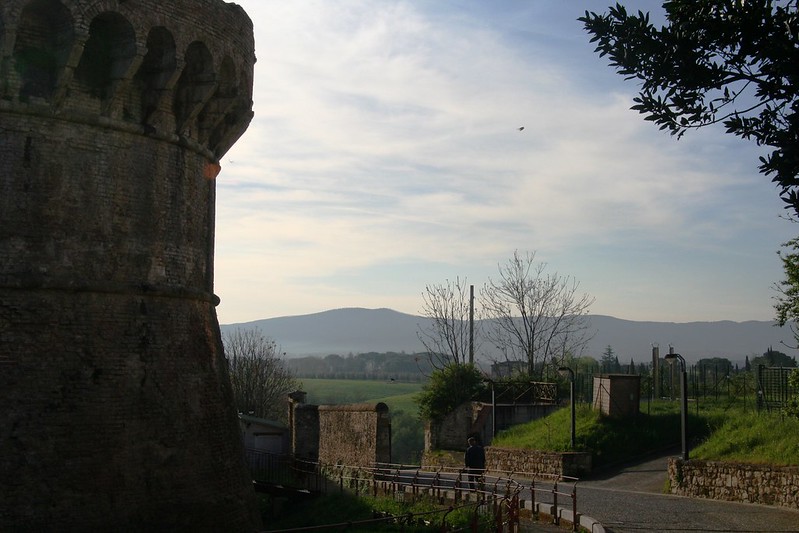