Backpacks to Briefcases (BP2BC) is a programming series that offers JCU students the opportunity to create a more seamless transition from college to professional life. This fun and interactive series will help you develop important life skills that you might not learn in the classroom.

Join us for this year’s BP2BC events and get a leg up on your peers. Events include opportunities to network with local alumni, learn about managing your personal finances post college, cooking for yourself, and eating healthily on a budget. Students from all majors and disciplines are welcome and encouraged to participate in the series. Whether you’re entering the work world or continuing your education, this series offers an opportunity to develop skills that will benefit you throughout your adult life.

The Backpacks to Briefcases series is brought to you by the Office of Alumni Relations.

t is possible to eat healthy on a tight budget. Join us at Heinen’s new beautiful downtown location, as Wellness Consultant Carla A. Iafelice shows you what to look for when checking labels while buying groceries and how to read a sales ad to find the best deals. Then, Bob Sferra ’86, owner of Culinary Occasions, will put on a cooking demonstration using ingredients found right there in the store. There will even be a shopping contest to win prizes. 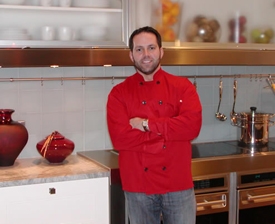 Creating with food is Chef Bob Sferra’s passion. Born into a big Italian family, cooking symbolizes everything that he loves. A graduate of John Carroll University with a marketing-business degree paved the way for his culinary career. As a chef’s apprentice he helped Parker Bosley create The Cleveland Restaurant School. He was fortunate enough to attend the Cooking School at the Ritz-Escoffier in Paris, and won a scholarship to attend L’Ecole Lenotre in Plaisir, France. After earning a Grand Diploma in Pastry Arts from The French Culinary Institute in New York City and upon returning to Cleveland, Chef Sferra served as the Pastry Chef at the Inn at Turner’s Mill in Hudson;Executive Chef at The Harp-Irish Pub; chef at The Foundation House on the main campus of the Cleveland Clinic and the Culinary Director for a local Culinary Arts Center. In addition to managing his growing culinary and events business, Chef Bob currently serves as the Executive Chef Consultant for Trevarrow, Inc., Northeast Ohio’s leading Wolf and Sub Zero appliance distributor. He has made multiple television appearances, as well as being a published food writer and culinary consultant.

He and his staff are fiercely passionate about attention to every detail, and continue to be recognized as leaders in the culinary industry in Northeast Ohio

Are you wondering how you’ll afford life after college? Do you know how to secure a car loan? Are you worried if you can buy a new car with all your student loan debt? As you are about to leave the secure confines of campus life have you thought about your financial future? If any of these questions plague you, this workshop is right for you. This program will feature three young alums who will share their insights and knowledge on navigating your finances after college.

Food will be provided. Those who attend will have a chance to win prizes!

We are excited to welcome moderator Rosanna Hoelzle ’07, and guest speakers Kyle Reynolds ’99 – Vice President at Huntington Bank and Mark Annichine ’99 – Wealth Consultant & Owner of The Financial Center, to help you explore your financial future.Meet the Presenters

Rosanna V. Hoelzle ’07 graduated from JCU in 2007 with a Bachelor of Arts in History. After graduation, she joined the Jesuit Volunteer Corps: Northwest in Portland, Oregon. There she worked in a Catholic parish providing services for the houseless and low income individuals of the city. Rosanna earned a Master of Public Administration, with a concentration in Municipal Government, from the University of Toledo in 2010. She currently serves as the Chief Administrative Official for a village near Toledo. Her work includes overseeing all operations and services provided to the citizens (excluding police and fire services) and ensuring these services are delivered to the pubic efficiently and effectively. She resides in Toledo and lives with her personal accountant, aka her husband, and their newborn daughter.

Mark Annichine ’99 graduated from JCU in 1999 and immediately started in the financial services industry. He began his career with a firm in downtown Cleveland, leaving after two years for a firm in Pepper Pike. Six years later, Mark decided to open his own business in Twinsburg, The Financial Center, where he works on behalf of his clients as a wealth consultant. As a wealth consultant, Mark helps his clients to establish financial goals to obtain their life objectives. He then works with them to create the appropriate plan of action in achieving those goals, and finally, he coordinates with them to execute on those plans.

He lives with his three sons and dog in Twinsburg, OH.

Kyle Reynolds ’99 is a 1999 graduate of JCU earning a degree in English with a minor in Business. After graduation, Kyle moved to Pittsburgh to begin his career as a financial planner with American Express Financial Advisors, working there for approximately two years. He then moved to PNC Bank for 13 years, working in the Retail system, Business Banking and finally Wealth Management. He now works for Huntington Bank in the Wealth Management area, providing lending and deposit services to high net worth individuals. He lives in Oakmont, PA with his wife Casey (Class of ’99) and his two sons, Jack and Dylan